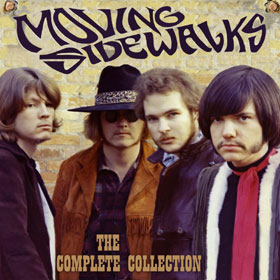 When The Moving Sidewalks are mentioned at all, it’s general in the context of them being a forerunner of ZZ Top (guitarist Billy Gibbons fronted The Moving Sidewalks). But the Texas quartet deserves more than a footnote in some ZZ Top essay; the group’s music is of a piece with other sixties Texas bands of note (Bubble Puppy, 13th Floor Elevators and – I would even argue – Green Fuz.

The Moving Sidewalks folded in many of the familiar trippy/hippie influences of the day: swirling sitars, a bit of studio effects here and there. But at their core they were a hard-charging rock’n’roll band. Though they only released one record (1967’s Flash), and though by the time that LP hit the streets, the group had already folded (or begun its metamorphosis into the very different ZZ Top), their music remains noteworthy.

The group’s bluesy, riffy garage-punk style was showcased on Flash as well as on a clutch of non-LP singles and unreleased alternate takes. The latter – along with five previously-unreleased tracks by The Coachmen (an embryonic version of The Moving Sidewalks) form a second disc in a new package from Rock Beat titled The Complete Collection.

The biggest difference between The Moving Sidewalks and ZZ Top is the former’s reliance on keyboards. There are plenty of gospel-flavored Hammond textures in the group’s slim catalog. “You Don’t Know the Life” is a downtempo number not miles removed from Boz Scaggs‘ cover of Fenton Robinson‘s “Loan Me a Dime.” But that number is contrasted with “Pluto – Sept 31st,” a tracks that mines a vibe very similar to Jimi Hendrix Experience‘s “Fire,” a clear influence. “No Good to Cry” sounds a good bit like early Procol Harum; Gibbons’ guitar tone and finger style is reminiscent of Robin Trower’s approach. This may be pure coincidence; Procol Harum recorded their debut LP in June ’67, so it’s unlikely – though not inconceivable — that Gibbons and his bandmates heard the British band’s music.

The Hendrix influence pops up again on “Eclipse,” a snaky number that bears traces of Axis: Bold as Love‘s “EXP.” The tune gets weirder and further out the more it unfolds; it’s exceedingly unlikely this cut was ever part of the band’s live repertoire. “Reclipse” is even stranger, and in places suggests Frank Zappa‘s Lumpy Gravy.

The Moving Sidewalks seem to have been a relatively democratic outfit: though Gibbons had a hand in the composition of six of Flash‘s ten tracks, keyboardist Tom Moore wrote two of the songs, and an extended blues is credited to all four members. (Producer Steve Ames gets partial credit on nearly half of the cuts as well).

As it turns out, Hendrix himself does crop up in the Moving Sidewalks’ relatively brief story; the Texans opened for the Experience on some gigs, and – according to the delightfully detailed liner note essay by Bill Bentley – the two groups got on quite well.

The tracks on the bonus disc often sound like the work of a wholly different band, even when they’re not. Whiny combo organ is the highlight of the non-LP single “99th Floor,” a legendary garage nugget/classic. Some tasty guitar dialogue enlivens this treasure, which sounds much more like Roky Erickson‘s 13th Floor Elevators than anything on Flash. (Two demo versions of the song from 1966 by The Coachmen are included as well; they’re interesting, but pale in comparison to the released version.) The other non-LP tracks sport a harder, punkier edge as well; those tracks would sound right at home on a Pebbles compilation. Three takes of The Beatles‘ “I Want to Hold Your Hand” pretty much reinvent the tune as a heavy rocker; think of what Vanilla Fudge might’ve done with the song, remove all the pretentious trappings they’d apply, and what you’re left with is something like The Moving Sidewalks’ version.

In addition to putting together a sonically brilliant package – no small feat for relatively obscure music from more than 45 years ago – Rock Beat has applied great attention to detail to the box set. A pair of LP sleeve replicas hold the discs, and a fifty-plus page, CD-sized booklet is chock-full of photos, memorabilia and the essential essay. (Be sure to check out the photos of Sidewalks bassist Don Summers for proof that he invented Robert Smith‘s hairdo.) The whole thing comes in a sturdy pink box. With the release of Moving Sidewalks: The Complete Collection and the various-artists Surf Age Nuggets: Trash & Twang Instrumentals 1959-1966 (reviewed separately), Rock Beat is staking a claim as the rightful successor to Rhino when it comes to thoughtful box sets.