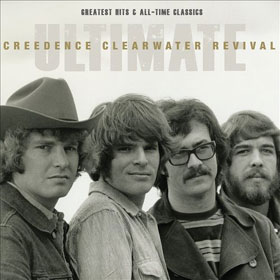 Few rock acts have seen their catalog subjected to as much incessant compilation-izing as Creedence Clearwater Revival. Not counting live albums and the Golliwogs juvenilia, the group released seven albums in the space of five short years. But no less than a few dozen(!) collections of their music have appeared, starting with Creedence Gold back in 1972. Some are more worthy than others, and since the group left quite little unreleased material in the can, most of those comps do little more than recycle a bunch of (admittedly great) tunes in various permutations.

While CCR is often called the Great American Singles Band, it’s worth noting that they never quite got a #1 on the US charts. But for Creedence, “single” is more an aesthetic than a commercial term. Nearly every one of their songs held up (and holds up) on its own. Put a bunch of them together in whatever kind of mixtape or collection you like, and the result is predictably great. Though it’s rarely greater than the sum of its impressive parts. For that, one has to return to the original albums themselves.

Those records – well, all except the oft-maligned (and not as bad as legend suggests) Mardi Gras — were reissued with whatever bonus tracks as could be located back in connection with the group’s 40th Anniversary. The more recent reissues have been a mixed bag: The Singles Collection is amazing, especially in its box-of-45rpm-vinyl records edition, but Covers the Classics feels like a cash-in, a thin retread.

But the new three-disc Ultimate Crededence Clearwater Revival: Greatest Hits & All-time Classics is a tidy package that brings together the best of all world. Still not quite as good as simply buying all seven LPs (and the couple of live sets), Ultimate CCR does the band’s catalog a good service by boiling it down, but not too much. The first two discs survey the band’s singles and (most of the) most notable album tracks. One can – as I am now – quibble with the song selection: where’s my all-time favorite CCR tune, “Ramble Tamble”? – but there’s no denying that the set is all killer and no filler, a good two-disc summary of no less than forty studio tracks. There’s nothing from The Golliwogs, no rare/unreleased tracks. But that’s not the purpose of this set; no, instead Ultimate CCR aims to show the group at their best, and in that they largely succeed. There are even three cuts from Mardi Gras! (Wags might tell you those are the only three worth hearing. I would disagree.)

Where Ultimate CCR really shines, though is on its third disc. Freed from the constraints of presenting a concert en toto, this disc showcases the best of the band onstage. Drawing four cuts from The Concert (itself re-reissued in 2009), the disc also surveys strong live numbers that had appeared on the 40th Anniversary sets as bonus tracks. Nothing from the late-period trio lineup live release Live in Europe is included, however; all the tracks here date from the group’s peak onstage period (roughly 1969-71). The sound is pleasingly harsh, and that’s meant in the best possible way. There’s no slickness, no artifice about these performances. And the highlight among highlights has to be the 1969 reading of “Suzie-Q” from San Francisco’s Fillmore; the band simply cooks. John Fogerty shows that he’s full of evocative licks and fills, as he takes a reeeeally long guitar solo (the song clocks in at just shy of twelve minutes, and never fails – even for a few seconds – to be less than thrilling. And best pals Stu Cook and Doug “Cosmo” Clifford prove once again why they’re rightly acclaimed as one of rock’s all-time great rhythm sections.

If you already own the 40th Anniversary reissues and The Concert, there’s little reason to pick this up, save the nice packaging and concise, insightful liner essay by Alec Palao. But if you don’t have those, Ultimate CCR pretty well lives up to its name and is recommended on those terms. And seeing as it’s the holiday season, this 3CD set would make an excellent gift for that special person on your list.