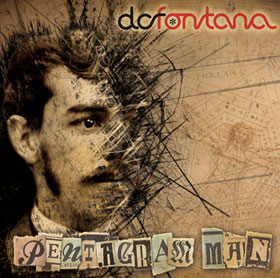 With their latest EP Pentagram Man, DC Fontana have executed a deft musical left-turn. The group first came to my attention via the inclusion of the neo-Northern Soul (albeit with combo organ) “Remember Me” on Shindig Magazine’s It’s Happening! compilation. Their 2011 album La Contessa delivered the goods in a big way, landing on my short list of best albums of that year.

On that release, the group’s trademark sound was built around a few very distinctive elements: Karla Milton‘s assertive, expressive vocals (very much in a Julie Driscoll mode), and on other tracks, the Italian-language vocals of Kicca Andriollo (described by DC Fontana’s Mark Mortimer as the group’s “permanent guest singer” — ed). And DC Fontana’s beefy horn section added a defining element to many of the songs. The group’s original material managed to look both forward and backward at once, but a strong flavor of Northern Soul, sixties mod-ness and continental panache were all key elements in what made the group stand out from the pack.

So it was with some great surprise that I received the music presented on the six-song Pentagram Man EP. True, I did know that Milton had departed the group, the lead vocal position haven been taken over by Louise Turner (Milton does appear on backing vocals on one track). But Andriollo is also gone, and – this is where things take a dramatic turn – the horns have been pared down and all but eliminated on several tracks. This is a leaner, much more streamlined DC Fontana.

And if that weren’t enough, the group has pointed its retro-meter in a decidedly different direction this go-round. Still expertly balancing vintage/nostalgic styles with modern textures, DC Fontana hits all the right notes. But the group’s inspiration here leans in a much more, er, lyseric direction. The title track on Pentagram Man sounds like a cross between the Brit-psych one finds on Nuggets II: British Empire and Beyond, balanced with some big-guitar Britpop a la Stone Roses and Oasis. Subtle hints of Status Quo‘s “Pictures of Matchstick Men” give a delightfully nostalgic flavor to what’s really a timeless pop song. Some tasty electric piano and splashy drums enliven a head-nodding outro.

“DevilAngel” feels a lot like A Camp; though Louise Turner‘s vocal texture is distinctively different than that of Nina Persson, the airy and cinematic/dreamy production aesthetic (with cavernous, twangy guitar) does invite the comparison to the Swedish pop group. Some sparingly-applied horns (note that they’re not completely gone, just dialed back) add a south-of-the-border flavor.

“What Would It Take?” departs almost wholly from what might be termed the DC Fontana formula. Deft acoustic guitar picking provides the bed upon which the song is built. True, the band’s continental bent is exercised here; the song’s vibe isn’t a million miles away from Françoise Hardy, but with less of an overtly sentimental feel. The song nods in the direciton of early 70s British folk, echoing King Crimson‘s original demo version of “I Talk to the Wind,” right down to some subtle flute work.

“Satisfied (Part One)” may be seen (or heard) as a gift to those who wanted DC Fontana to stay where they were. Long a staple of the band’s live set, the song (as Part Two) appeared on their Six Against Eight album, albeit in a very different arrangement. Here the swinging tune – built upon a deceptively simple two-chord foundation – is presented with more subtlety, substituting arrangement complexity for the verve and dynamic of the earlier version. Plus, it’s sung in English this time. DC Fontana fans will want – no, need – both.

An overt titular nod to a similarly-titled song by sixties Los Angeles scenesters Love, “Sighed DC” dives into the deep end of neo-psychedelia, with swirling guitars, backward loops, and otherworldly textures weaving in and out of the mix. “Found” sounds and Mellotron flutes populate the first four-plus minutes of the piece; that first half can scarcely be termed a “song,” as it has little in the way of melody. More of a tone poem, it does unfold into a nicely blissed-out droning piece.

An alternate version of the title track wraps up the Pentagram Man EP. This version features Don Fardon, perhaps best known as (a) former lead singer for The Sorrows and (b) the first artist to have a huge success with a million-selling cover of J.D. Loudermilk‘s “Indian Reservation” (this was prior to Paul Revere and the Raiders‘ version). Fardon’s vocal gives the track a wholly different flavor from the main version, but once again, fans will want both. And when they pick up the shortish but no-filler Pentagram Man EP, that’s exactly what they’ll get.