One You May Have Missed: Miles From India 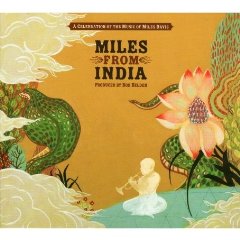 I don’t claim to understand jazz. I think, I believe — and this is the thought, the belief of a rock fan, please understand — that at its most successful, its most transcendent, jazz is the intersection of mathematics and soul. It’s the crossroads of mind and spirit, of intellect and feeling.

I don’t claim to know a whole lot about Miles Davis. I own a few of his albums, and that’s it*. Offhand, I think it’s Miles Davis’ Greatest Hits or something like that. And I know him as a sideman of one of the jazz artists I truly enjoy, Cannonball Adderley. What little I know about Miles is that he pushed boundaries, was an incredibly demanding bandleader, and — to put it mildly — was not known as a sweetheart. A bit like Frank Zappa, to make a reference that brings things back into an area in which I’m on more solid footing.

To continue the Zappa parallel, if you worked with Miles, that was shorthand for your being good. Damn good. Scary good. It also meant that you could traverse musical boundaries the way mere mortal musicians could play in different keys.

A bunch of Miles veterans — people one or at most two degrees removed from Davis’ orbit — got involved with this project, this Miles From India: A Celebration of the Music of Miles Davis. The other half of the musicians are traditional Indian musicians, people from a culture in which (as the liner notes helpfully explain) there is no jazz tradition. So all these cats got together and played a bunch of Miles tunes. Not willing to leave well enough alone, they did challenging stuff like change the time signatures. Not from 4/4 to 3/4, mind you; none of that simple stuff for this crew. Instead they took a track like the already mind-blowing “All Blues” and recast it from 6/4 into 5/4. That track starts with a long sitar solo intro; beautiful stuff, but nothing way out of the ordinary. But then the horn section comes in, and it’s on familiar (read: Western) ground. Juxtapose the two and you’ve got something that is unlike anything I’ve heard before.

The two-disc set is full of this kind of thing. On “Jean Pierre,” guitarist Mike Stern takes things into another dimension. This stuff defines psychedelic, and not in some lame Grateful Dead space-jam noodling way, either.

Look. I don’t know how to explain half of what’s on this set. All I know is that it’s amazing. Perfectly suited in turns for pleasant background music, close and critical listening, or zoning out in a “wowwww” mode, Miles From India is perhaps the most provocative release of 2009. That in itself would be enough. But it’s quite accessible as well. Required listening.