This decade is looking to be an important one for unearthing of landmark vintage jazz recordings. Resonance has unearthed an early Wes Montgomery set and a pair of amazing Bill Evans shows, and I’m anxiously awaiting news about what they’ll release next. And when I first learned of the launching of the German-based Jazzhaus label, I was so excited that I scheduled an interview with the label’s curator, Ulli Pfau. Several months went by after Jazzhaus’ first brace of releases, but I’m pleased to report that in the fourth quarter of 2012, three more recordings from SWR’s vaults have found release. 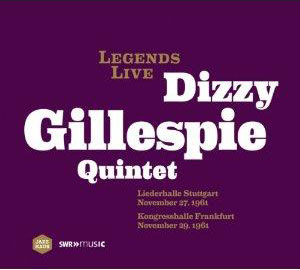 Legends Live: Dizzy Gillespie Quintet – Liederhalle Stuttgart November 29, 1961
“The Mooche” is a 1928 Duke Ellington composition that has passed into the popular consciousness; it’s one of those songs you’ll recognize even if you have no idea where it came from. Here in this ’58 concert, Gillespie and band (featuring Lalo Schifrin on piano) update it for the bop era. Elsewhere there are nods to bossa nova’s influence on jazz (“Con Alma”), some lyrically cool jazz (“Willow Weep for Me,” featuring some tasty extended flute soloing from Leo Wright) and more. Some playful and goofy (yet expert) vocalisms are the highlight of “Oops-Shoo-Be-Doo-Be.” An alternate take of “Con Alma” from the other night’s show used to create this set (two nights later in Frankfurt) makes a great collection even better. 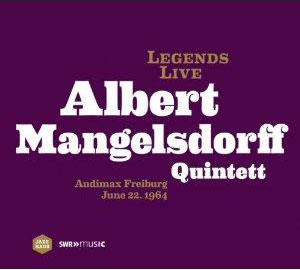 Legends Live: Albert Mangelsdorff Quintett – Audimax Freiburg June 22, 1964
It’s often noted that the Europeans have long taken American musical forms more seriously than we do here at home. What’s less noted is that they sometimes played the stuff themselves, and well. As the brief liner notes point out, Mangelsdorff was “Germany’s one true international jazz star.” His band’s repertoire was in its own way a sort of proto-world music, drawing as it did from musical traditions around the world (particularly Asia). This thrilling concert from 1964 certainly isn’t rock’n’roll, but the aggressive tone of rock does seem to have subtly informed this band’s musical approach. Mangelsdorff and band manage to look both forward and backward across the nine cuts in this hour-plus performance. 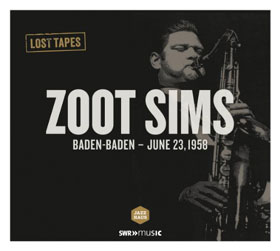 Lost Tapes: Zoot Sims – Baden-Baden June 23, 1958
Unlike the two releases, this set has (technically) been released before. But as the accompanying press release (but not the liner notes) explains, a 1988 pressing was”flawed and of relatively poor quality.” No such criticism can be leveled at this Jazzhaus release; the sound quality is superb, showcasing Sims and band on eleven numbers, during which they change-up the instrumentation between each piece. A nice mix of standards (Jerome Kern‘s “All the Things You Are”) and original numbers by Sims and by band pianist Hans Hammerschmid are highlights of this lively set.