Concert Preview: The Who

I’m very excited to be going to see The Who in concert in Greenville SC, just down the hill from our mountains tonight. It will be the third time I’ve seen the group onstage.

The first time was in 1980. Not that final “farewell” tour, but a short mini-tour that took the band to a handful of sports arena dates. Not very long after the Cincinnati Riverfront Coliseum tragedy, the summer 1980 show in Atlanta holds some particularly vivid memories for me. My buddy Lex and I ventured downtown to camp out for advance tickets when they went on sale several weeks before the concert date (electronic ticketing was in its infancy in those days, so “first come,first served” truly was the order of the day; read about that era and much more in the excellent Ticket Masters: my review is here). After spending the night on the sidewalks outside the then newish Omni, home to Atlanta Hawks and Flames pro teams (it’s long gone now; Atlanta builds and destroys with impunity) alongside a bunch of fairly scary types (we were innocent, suburban sixteen year olds), we ended up buying our tickets from a scalper who had a better spot in line. We paid about $20 each for our 14th-row seats. 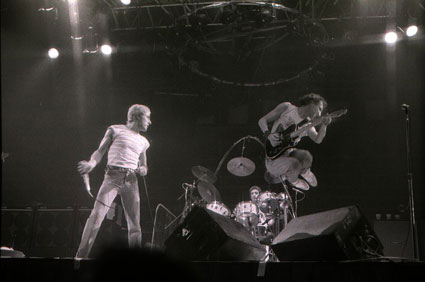 When the day of the show arrived, we got an adult (his Dad or mine, I can’t recall) to drive us to the nearby shopping mall, where we caught a city bus downtown. Our inexperience with urban navigation meant that we were caught flat-footed to discover the bus that ran after business hours followed an abbreviated route and thus didn’t take us right to the Omni. Deposited instead onto Peachtree Street, we warily hailed a cab. This was the first (and for many years, last) time either of us rode in a taxi, and we were shocked and a little frightened when the cabbie immediately offered to sell us drugs. We politely declined his kind sales pitch, and after enduring the four-block(!) ride, ran away from the cab as fast as we could.

As we approached the Omni, I casually asked Lex, “You’ve got your ticket, right?” He stopped dead in his tracks: He had left it at home! Me, I’m neurotic about such things, and not only had my ticket, but had verified that I did a good three or four times since leaving home. I sternly advised him that I would not be accompanying him on his round trip back to the suburbs to retrieve his ticket. He did in fact make it back in time for the show, but I vaguely recall that he did miss some of the opening set by Willie Nile.

The show itself was great. This tour was of the Kenney Jones era, so I am not one of those lucky people who can claim to have seen the mighty Keith Moon onstage, but the four-piece lineup (augmented by a three-piece horn section and, I’m pretty sure, longtime keyboardist John “Rabbit” Bundrick) tore through the group’s catalog. It was certainly the loudest concert I had attended up to that point, and few of the countless concerts that I’ve seen since were nearly as loud. 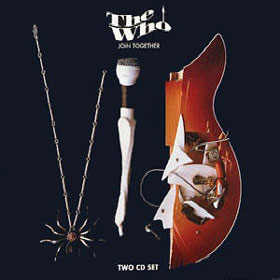 The next time I saw the Who was some nine years later. Newly married but as-yet childless, I saw the show with my (then-)wife at what was then called the Lakewood Amphitheatre. (It’s changed names and sponsorship countless times. If it still even exists, these days it’s probably the Krispy Kreme Lakewood Theatre or the Depends Undergarments Arena or something like that.). The group for this tour was a greatly-expanded lineup that found Pete Townshend on (shudder!) acoustic guitar, alongside countless faceless players. They put on a decent show, but the bloodless renditions felt more like a Who tribute group fronted by Roger Daltrey. The show was also built around Tommy, my least-favorite album in the group’s entire catalog. (For me, “least favorite” Who still beats a lot of things, though.) The tour was documented by release of the only truly dreadful Who album ever, the 3LP Join Together.

And that was it until now. Busy raising a family, I missed subsequent opportunities to see and hear The Who, including their mid 90s mounting of a Quadrophenia tour. I considered that one, but was wary due to its billing as featuring all-star guest vocalists. “Meh,” I thought.

Tonight looks to be different. Though The Who have only released one album of truly new material since 1982’s It’s Hard (an album that has a few great moments – like the blistering guitar coda of “Cry If You Want” – scattered among its general mediocrity), and their 21st century return Endless Wire leaned a bit too far in a singer/songwriterly direction for my tastes, that 2006 album did include a bonus live disc called Live in Lyon. And the power of that performance suggested that there was plenty of life left in the old warhorses still. 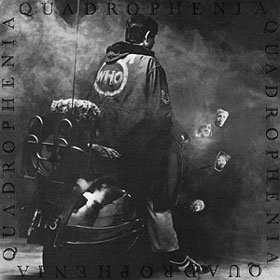 Of course John Entwistle‘s gone now, but Pino Palladino‘s bass work fits into the Who style in a way that the still-excellent Kenney Jones’ drumming never did. And Zak Starkey – Ringo‘s son, taught to play by Uncle Keith himself – is a fiercely powerful, expressive and aggressive drummer.

The band also includes Pete’s brother Simon Townshend plus three – three! – keyboardists. But when the plan is to recreate Quadrophenia (one of my favorite Who works) onstage, those banks of keyboards are potentially a very, very good thing. I’ll be sharing the experience with my adult kids this time around, and that will make the experience even better.

I’ll let you know how it goes.