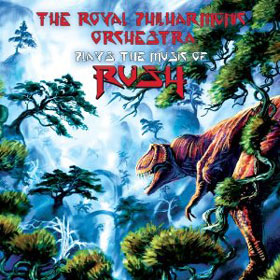 Normally, I don’t write negative reviews. Yes, I will point out those qualities that make a work less than it could be, but if a release is mostly or wholly without merit (in my estimation) I don’t bother to cover it. This is especially true if it’s by an artist who is not well-known.

But sometimes an album comes along, and just seems to beg for me to comment. This is such a situation, and the album in question is The Royal Philharmonic Orchestra Plays the Music of Rush. Now, I’m on record as not liking Rush. And my reasons are twofold. One, I think Geddy Lee has one of the most annoying voices in all of rock music. Two, I think Neil Peart‘s lyrics rank among the most pretentious, empty twaddle ever, and when you’re talking about progressive rock, that’s saying something.

But I do appreciate their instrumental, compositional and arranging abilities. All three band members are amazing, expressive players. In fact, not long ago I had Pandora piping through my house (as I often do), set to my Porcupine Tree “station.” A really cool and unfamiliar piece came on, and I was really digging it. After about five minutes or so, however, the singing started. It was Geddy Lee. It was all downhill for me from there. I remember thinking, ‘If Rush ever issues instrumental remixes of their albums, I’d buy those.”

I also have a grudging admiration for their covers album (2004’s Feedback). While it still features Geddy’s pipes, it does show that the trio has good taste in influences. It’s more effective than The Ramones‘ very similar outing Acid Eaters, too.

I mention all of this to provide the background for why I would even bother to listen to a Rush tribute-of-sorts album. My thinking was, this won’t have Geddy’s warble, and it won’t have Peart’s clunky (and occasionally Randian) lyrics. The part of the band that I like – their arrangements – would likely be highlighted. Now, it wouldn’t have Alex Lifeson‘s guitar work – it’s an orchestral album after all – but that would be replaced with some interesting classical motifs.

Or so I thought. The truth is a bit more gruesome. First off, there are vocals. If you’re actually a fan of Paul McCartney‘s Liverpool Oratorio or Roger Waters‘ Ça Ira, you might actually dig the parts in which choral/operatic-style vocalists intone “In the shopping malls…” and whatnot. Me, I find that the classical trappings only add to the vapidly pretentious (yes!) feel of Peart’s lyrics.

And then there’s the matter of guitar. While Iron Maiden‘s Adrian Smith and Marillion‘s Steve Rothery are both fine guitarists in their own right, they are not Alex Lifeson. The decision to feature electric guitar solos on an orchestral record leads the listener to compare them to the originals. Suffice to say neither Rothery nor Smith wins these battles.

On The RPO Plays the Music of Rush we do get the typical orchestra lineup: cor anglais, flutes, piccolos, lots of strings and so forth. And having been recorded in the venerable Abbey Road Studios – a place originally designed for such things – the sound is peerless. But the arrangements aren’t especially inventive. The album really lacks anything to make it all that special, and suffers fatally from the deficiencies I’ve pointed out. I view it as an opportunity missed: had the arrangements been a bit more gutsy, the guitars left at home, and the chorus told to go have tea, The Royal Philharmonic Orchestra Plays the Music of Rush would have been a far better album. Instead it’s just more Rush-related material that I’ll be passing by from here on out.