The 45rpm vinyl format isn’t dead. In fact, I see more of those little seven-inchers in my mailbox these days than I did even a couple of years ago. Here I take a look at four recent submissions. None is at all musically like the others, and seven out of the eight songs are highly recommended. 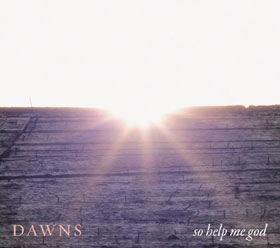 D A W N S – “So Help Me God” b/w “Camouflage”
Reading about this one, I was expecting some sort of Americana-oriented sounds. In fact the press sheet sent along with the disc (actually a 33rpm record) notes that the “touring band is an eclectic six-piece outfit with upright bass, cello, lap steel, bow saw and percussion…” But that’s not the vibe they conjure on ”So Help Me God.” They stomp through the song, sounding like a more melody-oriented Arcade Fire with better songwriting and a singer whose voice doesn’t grate on me. The flip, “Camouflage,” does present a slightly more acoustic-flavored approach; the haunted and breathy vocals, shimmering guitars and sparse, echoey production recall Big Star‘s Third. How can that not be great? And the direction the tune takes in its final minute is an unexpected treat. Plenty of shade and light on this record; if it’s a teaser to a forthcoming long-player, I’m all ears. White vinyl. 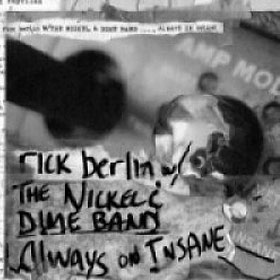 Rick Berlin w/the Nickel & Dime Band – Always On Insane (“Summer Roof” b/w “I’m Jes’ Sayin’”)
Ska in 2012? Well, okay. Sounding like some bizarre cross between Warren Zevon and Mental As Anything, “Summer Roof” features peppy horns and a fun, shouted chorus. But the song detours into a lovely midsection that’s as far from bluebeat as one can get – it’s singer/songwriter-ish, even – before launching back into an exuberant yakety-sax solo. Loads of fun, this one. The flip “I’m Jes’ Sayin’” has a relaxed, jazzy vibe with some soulful vocals backed by some lovely, creamy oohs. As the song unfolds, it’s reminiscent of Pete Yorn‘s work circa Nightcrawler. This song could easily be the work of a different band, but since it’s not, I’m left to think that Berlin has an impressively wide stylistic palette. 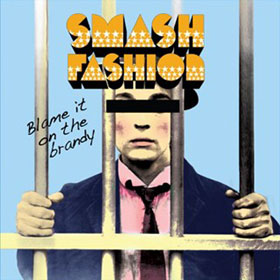 Smash Fashion – “Blame It On the Brandy” b/w “Marionette”
Calling to mind the fun, sleazy and swaggering era that brought us Sweet, Alice Cooper and Suzi Quatro, “Blame it On the Brandy” makes no concessions to modernity: it’s timeless in its approach. Handclaps, a straightforward earworm riff (albeit one that owes more than a little to “Bony Maronie”) and plenty of power chords all come together to remind you that – Gary Glitter be damned – glam rock was a helluva lot of mindless fun. Some dual lead guitar work on the outro is a not-so-subtle hat-tip to Thin Lizzy. The flip, “Marionette” is every bit as good, sounding as it does like a lost prime-era Elton John track without the piano. Some Queen-like guitar heroics are icing on this glammy cake. Woo-hoo indeed. Full album, please…stat. 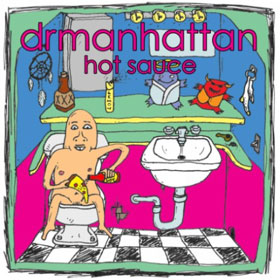 Dr. Manhattan – “Hot Sauce” b/w Dormlife – “Weak Sauce”
A lo-fi vibe and a slightly dorky campfire feel provide the basis for Dr. Manhattan’s song that seems to be mostly about smokin’ that shit. With a musical approach that’s a little bit like Violent Femmes, it’s fun in a rickety-jalopy sort of way. I can’t help picturing these guys in vests and fedoras, smirking their way through this barrelhouse romp, but it’s fun enough for what it is, in a modest sort of way. The flip from Dormlife is much stronger: it features tight’n’lovely vocal harmonies, a jittery stop/start melody, taut drum work, some aggressive acoustic guitar strumming and bursts of rubbery bass. Hard to pin down stylistically, it’s a sort of tuneful rethink of Red Hot Chili Peppers. Or something. Something good. Verdict: the “hot” song is relatively weak while the “weak” one is tasty stuff indeed. Clear red vinyl.