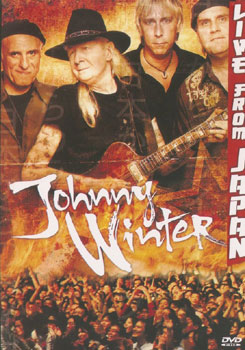 There’s no point in tip-toeing around it: blues guitarist Johnny Winter is old and frail. The cumulative effects of decades of drug and alcohol abuse/addiction (happily, he’s clean now) coupled with the medical problems associated with albinism make the odds unlikely that Winter would even still walk this Earth at age 68. But indeed he does, and in addition to getting clean, he’s also now benefiting from sympathetic management (something he lacked for many years as well), and is getting control of his back catalog back, slowly but surely.

In recent years a number of compilation videos have been released, including a pair surveying his TV/video work over the 1970s and 1980s. But the new Johnny Winter Live From Japan is different: it captures Winter and band as they look and sound today. (Well, April 2011.)

The bad news is pretty much what you might expect. Winter has great difficulty getting around. He’s helped onto the stage, though some clumsy video work attempts to hide this fact: an audience member just happens to step in front of the camera, hiding the stagehand who guides Winter out to his seat, front-and-center onstage. (There’s no shame in that: who doesn’t need a little help now and then?) Once there, Johnny remains seated for nearly the entire performance. And it’s also true that Winter’s voice doesn’t have quite the same ferocious presence it once did.

But the good news is that that’s the extent of the bad news. Winter’s playing remains as incendiary as ever. With his Erlewine Lazer (his axe of choice the days, perhaps due to its feather weight), Winter leads the band through a set heavy on covers. But those covers are songs that Winter has truly made his own. Freddie King‘s “Hideaway,” Bob Dylan‘s “Highway 61 Revisited,” and so forth. Winter doesn’t engage the audience visually – hard to do that when you just sit there, and you’re so blind as to be largely unable to see your audience – but he more than makes up for it with his playing. And that, after all, is why people come to see and hear Johnny Winter all these years: it’s not about the songwriting, and it’s often not even really about the songs. It’s about what Winter does with them how he delivers his shredding, bluesy riffage in a seemingly endless array of different ways.

The package’s track listing doesn’t seem to jibe with what’s on the DVD, but don’t let that bother you: just enjoy the boogie. The info on the DVD menu is closer to correct, but the packaging seems to have been done by someone who didn’t have the DVD at hand. There are a couple of “interviews” on the DVD, but these last under thirty seconds each; as I found out on two separate occasions, Johnny’s not much of a talker.

If you’re a Johnny winter fan, watching Live From Japan may make you feel sad for Winter’s health. It may lead you to say, “I’d better go see him soon if I want to ever see him.” Or not. But all that’s beside the point: if you like his guitar playing, and you’re interested in seeing and hearing that’s he’s still got some of the fire that helped him earn his place in history, then Live From Japan is well worth viewing.