In some ways, Night #2 of Yep Roc 15 might have been dubbed Night of the Loop. While several of the artists would fall into the singer/songwriter classification, there was extensive (and inventive) use of looping pedals. Perhaps the most well-known early example of the approach is KT Tunstall‘s “White Horse and Cherry Tree” performance on Jools Holland‘s program. For those who don’t know, the process involves playing a riff or sequence live, capturing it via the pedal, allowing it to loop/repeat, and then layering additional bits of musician upon it. At its most basic, it’s a way for a solo musician to create a “live” work without additional musicians. 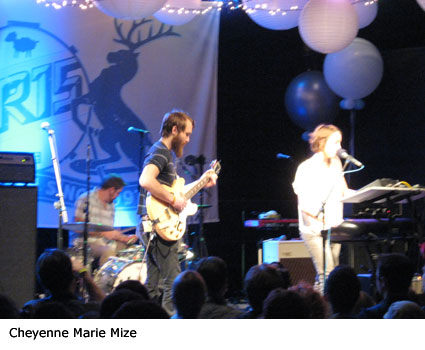 Cheyenne Marie Mize did a good bit of this. While she played keyboard mostly, she and an additional musician built the songs out of virtually nothing into stirring pieces. Her music falls into the pop, alt-rock and chamber-folk categories, and from my vantage point Mize was the least adept (of the roughly twenty acts to take the Cat’s Cradle stage during YR15) at engaging the audience. Maybe it was down to being first on the bill, as people were still streaming in, but she often cast her eyes downward, and while she played and sang well, she didn’t connect with the room in the way that more seasoned performers did. In the end, her studio work (recommended)is more compelling than her YR15 performance. 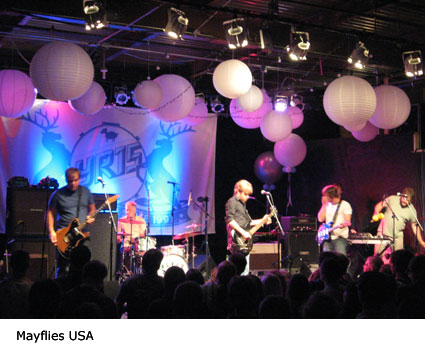 Mayfiles USA are a curious bunch. I was wholly unfamiliar with them prior to this evening. They were high-energy pop group, drawing form the same well of inspiration that fed groups such as Badfinger, Raspberries, Big Star and (the night’s headliners) Fountains of Wayne (and, say many reviewers, Wilco). Their songs were very catchy, and the band played exuberantly while grabbing the audience’s attention with their hooky tunes. But here’s the slightly odd thing: these relatively young-looking guys have been on Yep Roc for fifteen years, and they haven’t released an album of new material in the last ten years. I came away from their set thinking to myself, “I’m gonna buy their latest; they’re really good.” But their latest is from 2002. What’s up with that? (I have since learned that they broke up in 2002 but reunited for this event. That’s news to me, and – I expect – to many in attendance on Night #2.) Update from the band themselves: “We never really broke up, just stopped…” 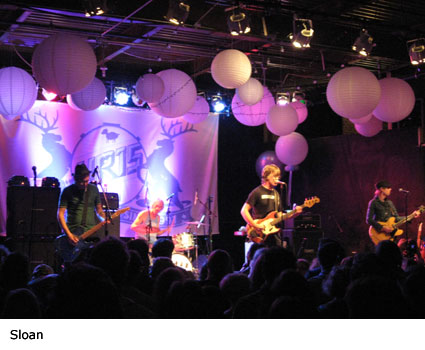 I must be the only powerpop fan who had never heard Sloan before Yep Roc 15. I’ve read about them, certainly, and know that they’re highly regarded among people whose opinions I respect. I guess I just never got ’round to them: so much music, so little time and all that. So I came to their set on Night #2 “cold,” as it were. And my impressions were threefold: one, yes, they write and play powerpop, after a fashion. Two, they play it loudly. Very loudly, in fact. I like my live rock’n’roll loud; don’t get me wrong. But in this case they would have been better had they dialed it back a few decibels. Unofficial scuttlebutt in the venue held that they insisted upon their own equipment, throwing the carefully-maintained schedule off a bit. Three, Sloan seem intent on peppering their powerpop with prog-like start/stops maneuvers and tricky time signatures. Personally, I’d leave those antics to the proggers. Overall verdict: very good set, but they didn’t knock me out, and the songs didn’t stick in my head like some of the Mayflies USA tunes did. 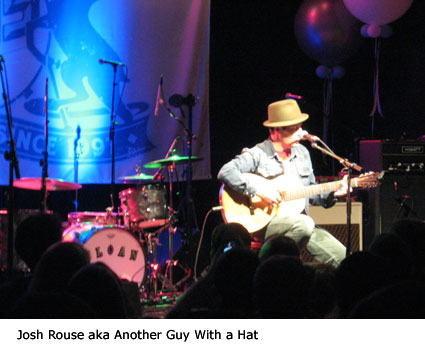 Awhile back, there was a (to me) hilarious exchange on an episode of Family Guy:

Well, Josh Rouse is another guy with a hat. And an acoustic guitar. He was jokingly introduced as being from Barcelona (like Manuel from Fawlty Towers), but in reality he’s the latest in heartland acoustic troubadours. To me (and people near me with whom I conversed) he sounds an awful lot like Paul Simon. Don’t hate me: I don’t really enjoy Paul Simon much beyond “Kodachrome.” I was bored, but I would be. Your mileage may well vary. 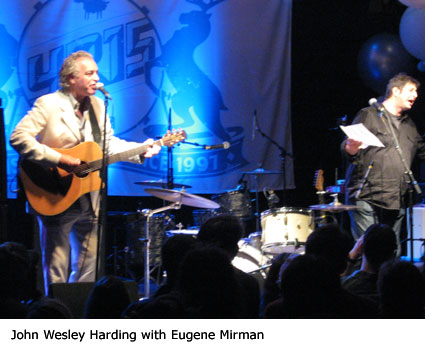 Liam Finn was next. Finn is the son of Neil Finn (Split Enz, Crowded House) but he’s well-deserving of fame on his own terms. I saw him years ago as an opener for Crowded House (he also joined Dad’s band for their set that night) and was fascinated by his unique approach. He does the looping thing as well, but does it on (often heavily distorted) electric guitar, and once he builds the song to a rocking crescendo – or what seems like one – he sits down at the drum kit and beats the living hell out of it, switching the loops on andoff at the right spots. It would be thrilling to see even if the music wasn’t well-crafted. But as our luck would have it, the tunes are good too. He was joined by a female accompanist on keyboards, vocals and (more) loops. The audience was in a frenzy over his performance, and we were exhausted by proxy once he finished. 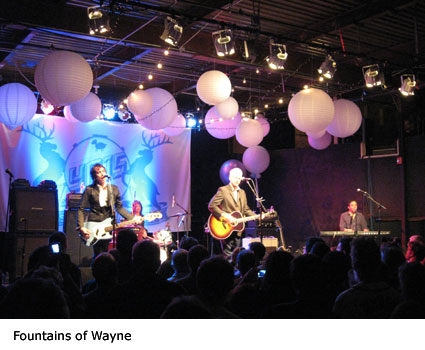 I’m not an objective reviewer of Fountains of Wayne: I love ’em. They were spot-on as the night’s headliners, and my only (extremely mild) complaint was the paucity of material played from their Utopia Parkway album, in my opinion the best thing they’ve ever done. But there’s no arguing with this: they delivered a fun set to round out the evening. In addition to hits going back to their first LP, they did a long – and seeming extemporaneous – Seventies Classic Rock Medley inserted into the middle of “Radiation Vibe.” Fun, goofy, ace and brilliant all at once.

Stay tuned for my coverage of the third and final night of the Yep Roc 15 extravaganza.