Home  »  interview   »   Jethro Tull’s Ian Anderson: Looking to the Past, Living in the Present

Jethro Tull’s Ian Anderson: Looking to the Past, Living in the Present 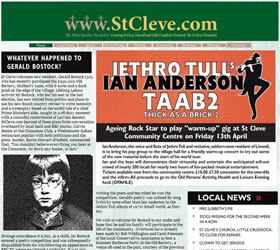 Ian Anderson cuts a memorable figure in the history of rock’n’roll; when his name is mentioned, the image that comes immediately to the minds of rock fans is of Anderson standing on one leg, playing his flute. Or perhaps it’s the Jethro Tull leader leaping madly about the stage as he sings his songs about the ills of religion, growing old, and other eternal topics. Tull’s first album This Was came out in 1968, and today at age 65, the Scotsman still shows no signs of slowing down: he tours relentlessly, oversees reissue/remasters of Jethro Tull albums, runs a successful group of (non-musical) business conglomerates, and always has his hand in a number of musical projects.

The latest of those projects is Thick As a Brick 2, a sequel to a 1972 Jethro Tull album. That ’72 LP – built around a central character of a young boy called Gerald Bostock – was Anderson’s effort to parody rock’s tendency toward overblown conceptual works; beyond the music, that parody took the form of an elaborate LP sleeve designed to mimic a newspaper, the fictitious church newsletter The St. Cleve Chronicle. The new album (released April 2012) revisits the story in the present day: the newsletter is now a website, www.StCleve.com. Anderson explains, “Almost a prerequisite was to try and go along with the parody, the spoof and the upbeat lavatorial humor of the original, as far as StCleve.com was concerned. But I knew I wasn’t going to write the words of Gerald Bostock; these were going to be my words, based on taking a leap forty years into the future. There are a lot of dark and serious elements lyrically on the new album. It’s a mixture of light and dark; there’s no parody in the lyrics.”

The music on the original Thick As a Brick was characterized by an arrangement that strung all the songs together into one long, continuous suite (presented onstage with actors and props, Thick As a Brick was even longer). As was the convention of that era, the studio album was a layered affair, crafted in the studio through massive overdubbing. In contrast, the sessions for TAAB2, as Anderson explains, employed a different approach. “The original album was conceived as a rehearsal in which we knew would add lots of other bits in the studio. And we did. But this time around I didn’t make that mistake, because I knew that playing it live would be a whole lot easier for everybody if we put on the record just what we could play live onstage.” The current tour presents both the original Thick As a Brick and TAAB2 in their entirety. 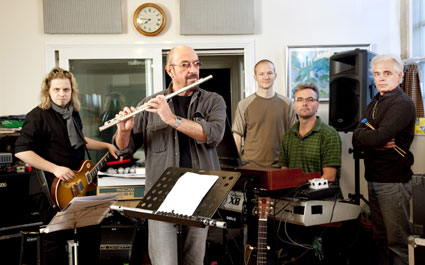 So to create a work that could be performed live, TAAB2 was recorded with a bare minimum of overdubs: “It was a consideration to make sure that I didn’t overlap voice, flute and guitar in the way that I did on the original album; that made it absolutely impossible to recreate with five people live onstage,” Anderson recalls. “Because I’m playing sometimes two flutes, two guitars, and singing all at the same time. And so when I did Thick as a Brick 2, I was very mindful of not doing that. There is only one exception where, I think, there was a note on the flute that overlaps with the vocal line. But I shall get ’round that,” he chuckles, “by stopping two notes early and taking a quick breath!”

Another significant fact about TAAB2 is that – even though all of the players are now (or have in the past been) in Jethro Tull – it’s billed as an Ian Anderson album, not a Tull release. Anderson gives three reasons for this. “I’ve never made any secret of the fact that I never really liked the name Jethro Tull in the first place; it wasn’t picked by me. It was a name given to us by our agent. And I didn’t realize at the time that we had been named after a dead guy who invented the seed drill.” Secondly, he believes that using his own name gives him freedom to do projects that might stray a bit from the classic Tull style. Regarding concert dates, “if it says ‘Jethro Tull,’ it’s likely to be the classic Tull repertoire. And that’s what we reserve those concerts for,” Anderson stresses. 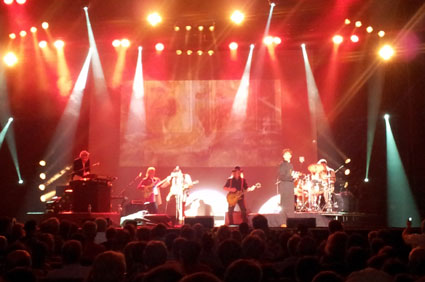 But his final and most important reason for billing the bulk of his concerts – like the TAAB2 tour that came to Asheville NC on September 28 – as Ian Anderson instead of Jethro Tull is this: “It keeps the riffraff at home! The beer-drinking buddies stay home instead of coming drunk to my concerts, whistling, shouting and hooting at all the quiet moments. That’s something I can’t abide.”

(An edited version of this feature ran in the September 25 2012 issue of Mountain Xpress.)

You may also enjoy a VERY lengthy and wide-ranging 2008 conversation between Ian Anderson and myself.