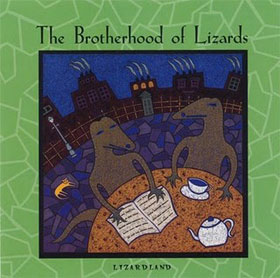 Martin Newell is one of the British Isles’ legendary unheralded treasures. Yes, those in the know understand and appreciate Newell’s particular brand of genius: working with a nonexistent budget and the most modest of equipment, he has for many years turned out some of the winningest pop music since, well, just since.

Anyone who values the deft wordplay of a Ray Davies, the clever turn of phrase and arrangment skills of an Andy Partridge, and the infectious melodicism of a Beatles (yes, really) should run right out and collect everything they can by Newell.

The thing is, that task isn’t the easiest one to accomplish. For many years Newell’s music has been only spottily available in the USA. Some limited-time distribution deals, mail-order fulfillment by the man himself, and the occasional semi-major-label compilation were the only ways to get his albums. Recording under his own name, as Cleaners From Venus and (once) The Brotherhood of Lizards, the results are (in the best possible way) not all that different from one another. Newell doesn’t repeat himself; he’s got far too many good ideas for that. But he does create music that sounds like, well, like Martin Newell.

Working with one-named Nelson (on bass drums and other assorted instrumentation), Newell recorded Lizardland in 1989 in his Wivenhoe, England garden shed. But Lizardland is no lo-fi affair; it sparkles in a way that some of Newell’s more modest productions sometimes do not. His chiming melodic sense – alternatively rocking and pastoral, and sometimes both at once – is on full display on tracks like “The World Strikes One,” and he leans in a slightly “Day Tripper”/mod direction for “Dandelion Marine.” In fact there aren’t any weak tracks on Lizardland. “Clockwork Train” might be my favorite track here; it’s a tough call when considering such a consistently fine effort. Originally released on an Atlanta-based label, the 2012 reissue from Kool Kat Musik appends eight more tracks from the same sessions.

If you’re a fan of classic pop, you simply can’t go wrong with any of Newell’s output. And once you’ve heard one album, odds are good that you’ll want to seek out more. For Newell novitiates, Lizardland is a great place to start. For everyone else, it’s another fine addition to the collection, and the bonus material means that even if you are – like this reviewer – a longtime fan who bought Lizardland many years ago, you’ll need this.

(Note: You may also enjoy my wide-ranging interview with Martin Newell.)