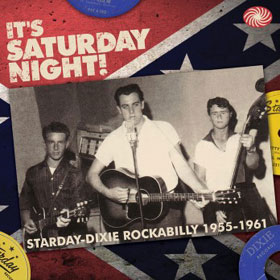 Leave it once again to the people at UK-based Fantastic Voyage to put together an interesting compilation of in-danger-of-being-lost American music. Their latest entry is a 3CD set called It’s Saturday Night! Starday-Dixie Rockabilly 1955-1961. Stuffed to the limit, this set includes 103 tracks that originally appeared on Texas-based Starday (a label founded by Lefty Frizzell‘s manager Jack Starns and “Pappy” Daily) and the Dixie imprint.

If names like Sonny Fisher, Rocky Bill Ford, Rudy Grayzell and Benny Barnes didn’t become household names, it may have had as much to do with the limits of record distribution in the 50s, plus a surfeit of talented performers. It’s Saturday Night! is full of gems; it’s the kind of collection that feels at times as though it’s full of hits. In truth, few of these tunes went anywhere commercially. Many of the artists featured had some or other connection to the big time: maybe they wrote songs for an artist who made it big; maybe they played on somebody else’s hit record. Or, more often, maybe neither.

Astoundingly, the sound quality on these sides is quite impressive. Once again I’m left to wonder just how Fantastic Voyage gains access to masters and sorts out knotty licensing issues for the ancient tracks. But fans of early rockabilly and rock’n’roll should be glad the English label keeps at it; It’s Saturday Night is well worth grabbing.