I had hoped to catch a few minutes of Yo La Tengo‘s 11:30 set at Memorial Auditorium, but (a) that venue was in the wrong direction and (b) The dB‘s were going on at the Long View Center at midnight. And more than any other act, The dB’s were my reason for going to Raleigh. So with not enough time to see another show between the end of The Jesus and Mary Chain‘s set, I headed north. 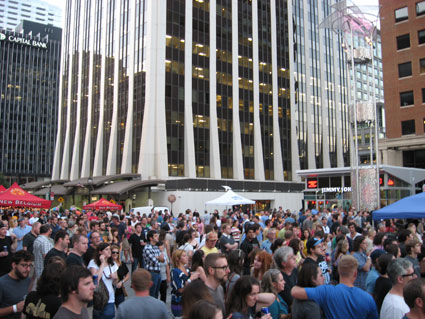 Apparently there were shuttles – I never saw one – but the multi-venue layout of the Hopscotch Festival in Raleigh was quite walkable. And being a fairly nice evening weather-wise, I hoofed it through the city’s bustling downtown district, through lively crowds filling the six or so blocks between City Plaza and the Long View Center. All of the eateries had customers spilling out onto the sidewalks (it was a Friday night, after all) so I had to make do with a couple $1 hot dogs from one of the countless street vendors. If nothing else, the meal was in keeping with the budget of a freelance music journalist.

I arrived at the Long View Center – a historic building that also functions as a Unity church – and went in and took a seat. The schedule was running a bit behind: Field Report was wrapping up their set. An acoustic-flavored set that nonetheless made use of electric instruments, I enjoyed what I heard of their music more than I might have expected (Good thing, as I’m on my way to the Americana Music Association Conference and Festival, where I will hear a great deal more in this style.)

I was a bit concerned when I had read (ahead of time, not in the Hopscotch compendium) that Azure Ray bore some musical similarities to Indigo Girls. I am generally not a fan of the music that comes from earnest, folky females with acoustic guitars. I was intrigued, then, to read in the compendium a comparison to Cocteau Twins. As the band set up, I noticed there was no drum kit, but two sets of keyboards, a bass guitar and cello would be part of their music. 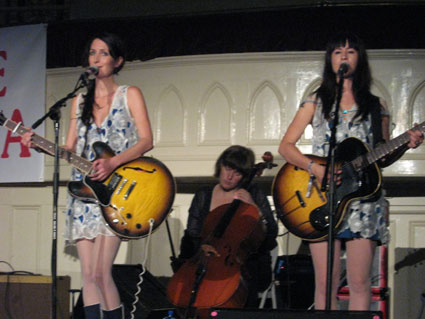 Azure Ray is built around the vocals and guitar (and keyboards) of Maria Taylor and Orenda Fink. And while their earlier albums (I’m told) do in fact lean toward acoustic sounds, their latest album (an EP, really) As Above So Below is a much more deeply textured affair. The duo’s assured yet fragile/breathy vocal harmonies blended into the washes of keyboards and delicate strums. Taylor seemed infinitely more assured on her guitar (a stunningly beautiful left-handed Gibson ES-335) than did Fink (on an equally lovely Gibson hollow-body electric); the latter played some solid melodies – the music is far too delicate and subtle to call them leads — and it appeared that her instrumental talents lay more in melodic runs than in chording.

The duo was ably supported by a pair of multi-instrumentalists; a woman alternated between electric bass and cello, and brought forth especially lovely sounds from the latter. A male on keyboard, electric guitar and bass (and some vocal harmonies) helped increase the depth of the arrangements overall. His e-bow work – in tandem with the cellist – provided soaring backgrounds on some of Azure Ray’s most atmospheric numbers.

Owing to their late start, Azure Ray’s set was cut short to allow The dB’s to get set up for their set, scheduled for midnight.

My Hopscotch Festival coverage concludes tomorrow with a review of the Friday night set by The dB’s.