A bit after 9pm, The Jesus and Mary Chain took the stage. Though I bought Psychocandy on vinyl upon its original release (1985), this was another band I had never seen live. I knew enough about their sound – it hasn’t changed much in the ensuing quarter-century – to expect their signature approach of melody wrapped in distortion. To some extent, that’s what they delivered. Through no fault of the band, the sound mix for the first several songs was beyond awful: Jim Reid‘s vocals were nearly inaudible. The guy next to me leaned over and asked, “Do you think they mean to sound like that?” I shrugged and noted that their records do tend to bury the vocals in a gauzy layer of feedback, so maybe. “But probably not,” I concluded. By the fourth or fifth song, the audience as a whole had figured out that something was wrong, and the fans up front started yelling at Reid. He got the message, and said over the P.A. to the sound guys, “The people have spoken.” At that point, apparently the sound guy woke up and did something about it; the mix was a notch or two better for the rest of the show. 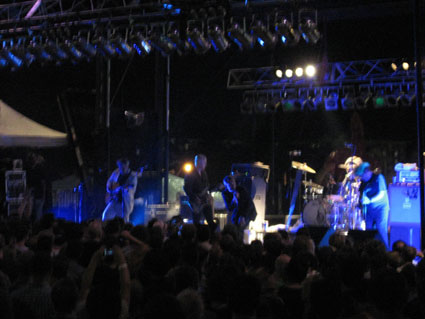 With his bank of Orange amplifiers, William Reid contended with (or coaxed; it’s hard to be certain) squalls of ear-piercing feedback during (and between) songs. Most of the band’s tunes unfolded at a magisterial pace, and with the thrumming bass and roaring feedback, I couldn’t help think that this allegedly oh-so-punk band of the 780s actually had more in common with the sound and delivery of Black Sabbath. They ran through their poppiest (and most well-known) numbers, “Just Like Honey” and “Happy When it Rains,” plus an assortment of later material. Oddly, the crowd was appreciably smaller for them than it had been an hour or so earlier for Built to Spill. My first thought was that somebody big must be playing elsewhere right then. Call me unhip, but I have never heard of a single one of acts that were playing at the same time at Hopscotch’s dozen-plus other venues.

Fun facts from Wikipedia: The Jesus and Mary Chain are currently on their ninth drummer (that’s more even than Spinal Tap!), third rhythm guitarist and fourth bassist. Though they announced about five years ago (when they reformed) that a new album was “in the works,” their most recent release of new material remains 1998’s Munki. 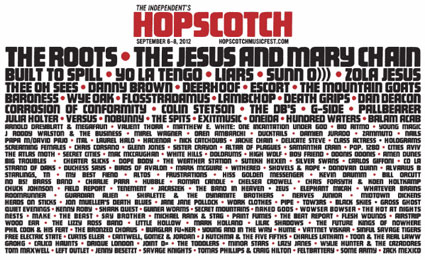 In the next entry, I’ll cover the fourth and fifth acts I saw during my Hopscotch night: Field Report and Azure Ray.