The Hopscotch Festival was a three-day event (September 6-8, 2012), but my schedule only allowed me to make a single-day trip to the festival in Raleigh, NC. I made the four-plus hour drive drive east, checked into my hotel and made my way downtown in time for the first show at the main stage, the open-air Raleigh City Plaza. First, I checked in to get my press credentials/show pass. Though the organizers had told me in advance “we’re a small festival,” their approach was anything but small. A large meeting room at a downtown hotel was used as the check-in station for press, photographers and volunteers alike. My immediate impression upon arriving there was that Hopscotch was a well-run, efficient and highly organized event. (Nothing happened the entire time to dissuade me from that belief.) I got my wristband in under a minute, and headed to City Plaza.

The first act up was Zammuto. Led by Nick Zammuto (formerly of The Books), the band took the stage just before 6pm. The crowd trickled in during their set, and the band was well-received. The Hopscotch handout (“band-by-band compendium”) did a fine, succinct job of describing the band’s sound: “A hybrid of twitchy tricky prog-rock meters, spoken-word samples and electronically augmented vocals…” I’d take issue with the prog reference – Zammuto re musically closer to standard indie-rock – but the samples and treated vocals did give them their own identity. The effects on Zammuto’s vocals (he’s pretty much the only singer in the band) added harmony vocal lines, and the net effect was something akin to what Fleet Foxes might sound like if they ever rocked out. 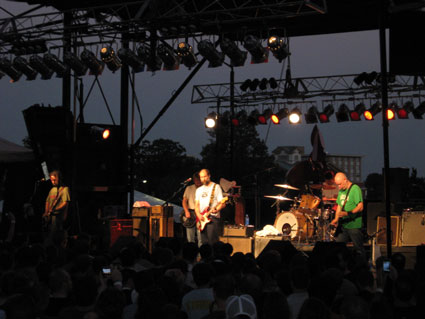 Next up was Built to Spill. I’d always wanted to see this band live; way back in 2006 when You in Reverse came out, I had plans to interview leader Doug Martsch, but for reasons now lost to the mists of time, it never happened. Onstage at Hopscotch, Built to Spill turned in a highly effective set; their sound is much more rooted in accessible pop melody than one might expect (though the compendium again mentions prog). By the time they got underway, the City Plaza was pretty well filled with fans; the band’s sound certainly drew more people in.

In the next part of my Hopscotch Festival coverage, I’ll review the set by The Jesus and Mary Chain.