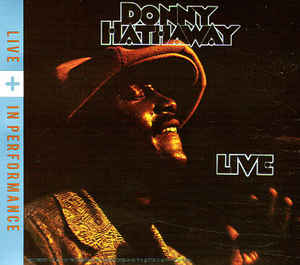 Take the crowd command of Isaac Hayes in his prime, the soulful melodicism of Steve Wonder at his peak, and the musical chops of, say, Billy Preston, and what do you get? Well, one thing you might get is the 1972 album Donny Hathaway Live. A mere eight songs, and originally on a single vinyl record, Live is a document of Hathaway’s live show in ’72. Compiled from dates at Los Angeles’  Troubadour and Bitter End, the set is long on solos – Hathaway himself plays all the keyboard save some organ by Richard Tee – but it never drags or meanders, not even for a moment. From its opening cover of Marvin Gaye‘s “What’s Goin’ On” through the end of the set, the band is in stellar form.

Donny Hathaway Live is amazingly recorded; it was produced for Arif Mardin, an excellent producer known more for his studio work. But the balance between the band and the audience is perfect; these are club dates, after all, and hearing the audience is an integral component of capturing the ambience of the shows.

Hathaway launches into keyboard solos at nearly every opportunity; there’s a jamming, rock sensibility about these songs that is nothing short of thrilling. “The Ghetto” starts out with some audience participation, and quickly becomes little more than a two-chord jam. But what a jam it is: Hathaway’s mean hammering on his electric piano often makes it sound like he’s got four hands.

In those capable hands, the work of others is reborn. Besides Gaye’s classic, Live includes stirring, deeply moving versions of Carole King‘s “You’ve got a Friend” and John Lennon‘s “Jealous Guy.” Listen to the crowd sing along on the former and you’ll feel like you’re there. Hathaway’s arrangement of the latter – a song that had only been out a few months – is nothing short of inspired.

Instead of waiting until late in his set to introduce the band, Hathaway introduces each player as he takes his turn in the spotlight. The crowd responds enthusiastically. Special notice goes to the precise, up-front bass work of Willie Weeks, though Cornell Dupree‘s guitar solos on “We’re Still Friends” are pretty ace, too.

But Donny Hathaway Live didn’t exhaust the recordings from those two shows. After his tragic death in 1979, his label compiled another album’s worth of material from the same shows — with no overlap – and issued the resulting collection as In Performance. Production on these tracks is credited to Mardin and Jerry Wexler, another man who truly understands how this sort of music should be presented on disc. The songs are a notch – just a notch, mind you – less exciting than the ones compiled on Live, but the performances are (of course) every bit their equal.

In 2012 Shout!Factory wisely did the obvious and brought these two releases together into a single package, titled Live + In Performance. The trifold digipack reproduces both albums’ original artwork, adds a very good (if brief) essay by David Ritz. If you like 70s soul and amazingly tight playing, then Live + In Performance should be your next purchase. If you’re new to Hathaway’s catalog, this too is an excellent place to start. My own album collection includes countless live albums, but Live + In Performance is one of the best live sets I’ve ever heard. Essential.