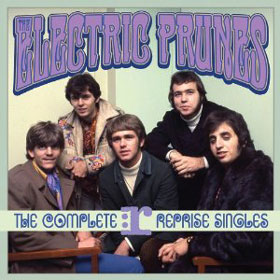 Rock historians have rightly made the point that one of the many ways in which The Beatles changed the music business was by ushering in the era of the self-contained group. Before them, as the story goes, most acts were a front person and a group of backing musicians often assigned (and controlled) by the label, or management. Once the Beatles came on the scene, they opened the door for bands to take a measure of control over their own output. Thanks to them, bands were allowed – and eventually expected – to write their own music, play their own songs.

While this narrative is pretty well accurate, the new rules didn’t apply to everyone. The history of 1960s rock is filled with bands who turned out some amazing music, even though they sometimes didn’t write it, and often didn’t actually play it. I hate to mention The Monkees here, since they are too often dismissed for these very reasons; they deserve better. So think instead (or also) of the Beach Boys‘ great music recorded by the Wrecking Crew (albeit under Brian Wilson‘s direction) while the band itself was on tour.

And then there are the more curious cases of bands such as The Chocolate Watchband and The Electric Prunes. Both bands turned out some excellent music – some of the best in the genre we now call garage/punk/psych or somesuch – but both bands saw a fair amount of music released under their name, music created largely without their consent or input. Some of it was excellent, some pretty good, some not so great. But the fact remains that their convoluted histories – due in large part to the dubious origin of some of their music – makes critical assessment of their catalogs-as-a-whole a difficult endeavor.

The whole issue is brought to a head thanks to a new Electric Prunes compilation from Real Gone Music entitled The Complete Reprise Singles. Twenty-four tracks spanning the era 1966-1969, the tracks are mostly what one would expect: the monaurally-mixed a- and b-sides of the group’s singles. But that definition only explains eighteen of the tracks. The remaining numbers are five promo (in other words, commercially unreleased) single tracks, and the group’s Vox Wah-wah Pedal commercial.

The first two cuts, “Ain’t it Hard” and “Little Olive,” won’t be familiar to most listeners; neither appeared on the group’s debut LP. Both betray more of a West coast jangle than the style most associated with the band. That sound, of course, is exemplified by the classic fuzz rocker “I Had Too Much to Dream (Last Night),” the title track off their first record. And the mono version – the one here – is the one to have; it’s the one that appeared on the impossibly influential Nuggets various artists compilation.

The group actually charted only twice: “I Had Too Much to Dream (Last Night)” made it to #11 on the pop charts, and “Get Me to the World On Time” made it to #27. (Luckily the Electric Prunes made a number of TV appearances promoting the latter – some in color! – so we have some visual memento of the original lineup.)

But despite some excellent material – the latter’s flip side “Are You Lovin’ Me More (But Enjoying It Less)” may well have influenced Syd Barrett, as I explain here – the band would enjoy no further hits. “Wind-up Toys” sounds like a bizarre cross of The Doors, The Monkees and Donovan, all filtered through the Electric Prunes’ wobble-and-fuzz aesthetic. And “Everybody Knows (You’re Not in Love)” sounds like somebody was listening to – and took inspiration from – Jeff Beck‘s “Hi Ho Silver Lining,” released several months earlier. And “You’ve Never Had it Better” deserved better than the non-action it got on the charts: with its tough, memorable riff, it should have been the band’s bridge into the harder sounds of the very late sixties. It’s easy to imagine The Stooges playing the song.

By the time of their Mass in F Minor (generally considered weird, innovative, a disaster or some combination of the three), only two of the original lineup (vocalist James Lowe and bassist Mark Tulin) remained. Some single tracks from that project represent the promo singles on this collection. Lowe and Tulin were gone after that. Which means that tracks #16-23 on The Complete Reprise Singles are the work of, well, other people. They’re not awful, but neither are they memorable. They’re certainly nowhere near as good as the fake Chocolate Watchband tracks on that band’s No Way Out and The Inner Mystique. In some way tracks like “Hey Mr. President” are reminiscent of the music that other faceless entities turned out in those days (I’m thinking of some of the tracks on the Wild in the Streets soundtrack, but then a lot of that was really Davie Allan and the Arrows). There’s a sold rock sensibility, but not much in the way of inspiration in the writing or playing.

That said, The Complete Reprise Singles remains essential for fans of the real group (and of the era/genre in general) if only for the early tracks; the Mass in F Minor stuff isn’t wholly without appeal, and it’s nice to finally have a legit (i.e. non-bootleg) version of the fun Vox radio spot.