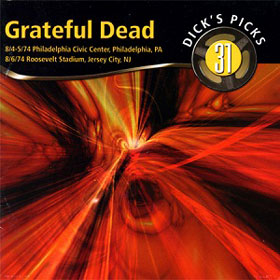 I had a minor epiphany recently. After years of slagging The Grateful Dead and their fans, I found a live album that led me to say to myself, “Aha…so this is what they find so special about the Dead.” As I’ve mentioned more than a few times, I like the Grateful Dead’s studio work (I have more than a dozen of their LPs) but generally find their live work to be aimless and meandering.

But it’s not always so: I love my 3LP set of Europe ’72 (though I’d pass on that dozens-of-CDs set documenting the whole damn tour, thanks) and recently gave a very favorable review to a reissue of the vinyl History Vol 1 (Bear’s Choice). But still, whenever I see a track listing that looks like this:

…I stay as far away as possible.

The Dick’s Picks series of releases, then wouldn’t be the first place I’d think to look for an exciting document of a Grateful Dead show. But Dick’s Picks #31 documents the equivalent of an entire concert, picking from the best (performancewise and fidelitywise) from three consecutive nights in August 1974. Two-track analog tapes from to nights in Philly followed by a show in nearby Jersey City provided the source material, presented on Dick’s Picks #31 without sweetening. It’s true that there’s not much you can do to nearly-forty-year-old two-track tapes other than bake, transfer and equalize them. The good news is that these tapes didn’t need anything done. The mix is crystalline, and it gives particular attention to Phil Lesh‘s bass work.

The Dead are in fine form here. Opening – as only they’d dare to do – with twenty-five minutes of “Playing in the Band,” they run through a set list that includes titles familiar to casual fans, not just Deadheads. Hell, they even do “Truckin’” on these nights! Some of the many highlights include a great rendition of “U.S. Blues” and a version of “One More Saturday Night” that’s a bit more restrained than the one on Skeletons in the Closet.

There’s only one “Space” wankfest here (thank goodness), and the duration of that track plus the two “Jam” ones that precede it total a mere 21 minutes. That’s not bad, considering Dick’s Picks #31 runs four discs. Yes, four. But across nearly five hours of music, The Grateful Dead showcase all of the things that make them the beloved institution they were and remain.

Musically, the group was near its peak in 1974. They were in that curious period in which they had but one drummer (Bill Kreutzmann), but that didn’t limit their ability to get their musical points across. As usual, the vocals – rarely a Dead strong suit – are iffy in places: less so when Bob Weir takes the lead, more so when Jerry Garcia does.

In fact the only serious criticism I can level at the performances captured on Dick’s Picks #31 is this: the presence of Donna Jean Godchaux. Her singing is, if you’ll forgive some obvious wordplay, god-awful. I’m not well-versed in the history of the band, but I can’t help but think that they would have chased her away were it not for the fact that her hubby Keith Godchaux was the latest in the long line of (ultimately doomed) keyboard players. Donna’s vocals add nothing good, stick out like a sore thumb, and threaten to ruin some otherwise excellent performances. Seeing as she didn’t play an instrument onstage, there would have been precious little for her to do other than sing, so it’s some small consolation that she is often silent on these tracks. When she’s not, you’ll know it, and chances are you won’t like it.

But that complaint notwithstanding, Dick’s Picks #31 comes highly recommended. And if you know my track record where the Dead are concerned (hint: theirs was the worst concert I ever attended) then you’ll know that it’s high praise indeed. I even recommended it over the four-disc Dick’s Pick’s #35 (from 1971 shows), which is pretty swell also. Chris Farinas‘ lengthy essay assumes the reader has a level of devotion to the band well beyond what I can claim, but it’s essential reading nonetheless.