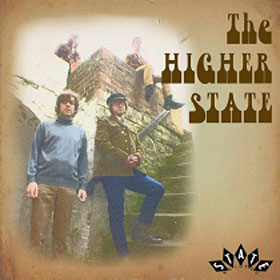 It is with some amusement that I turn to the words of that 21st century philosopher: “There’s an old saying in Tennessee — I know it’s in Texas, probably in Tennessee — that says, ‘fool me once, shame on…shame on you. Fool me…you can’t get fooled again.’” Back in 2010 I reviewed an album called Of the Moments, recorded by a group called Spur. At the time I remarked how authentically this new act captured the sound and feel of 1968. As I explained in a subsequent amendment to the review, Spur really was a group from 1968, a little detail that somehow initially escaped my attention.

It’s happened again, but in reverse this time. Kool Kat Musik is generally known for its fine catalog of present-day powerpop, but on occasion they release material outside that narrow scope. So when I received a CD copy of the self-titled album by The Higher State (along with a handwritten sticky-note letting me know that the release is “exclusive from Kool Kat Musik”), I figured that they had licensed a modern-day release of an obscure group from the first garage rock era.

Had I taken the time to look at the inner label, I might have noticed that the tracks were recorded between 2007 and 2012. But – as I explained in the Spur review/disclaimer – in general I try to listen without any more preconceived notions than necessary. And had the track sequence put the last track (“Know That You Know”) at the beginning of the disc, I might have realized what was up: that song was included on Shindig! Magazine’s first volume of their It’s Happening! compilations.

So not to belabor the point, The Higher State is in fact a very authentic recreation of the West Coast sound of the late 1960. With gauzy, just-lo-enough-fi production values, a general wash of reverb applied throughout, and copious helpings of Rickenbacker jangle, the album successfully evokes the wide-eyed spirit of that era.

The Higher State follow the popular practice among second- and third-tier rock bands of the mid-to-late sixties, and cover records by other artists they admire. In this case, it’s Love (“You I’ll Be Following” as well as studio and live versions of “7 and & Is”) and either Southwest F.O.B. or West Coast Pop Art Experimental Band (“Smell of Incense”). Either way, they give the songs their own stamp. Plenty of tight vocal harmonies and fuzz guitar are hallmarks of these and all the songs on The Higher State. Don’t get me wrong: their original songs are every bit as authentic, and often heavier on the (always welcome) hook-quotient.

Like any good bunch of actors, the group – personnel unlisted on the sleeve – stays in character the whole time. So when one of the radio promo tracks plays, there’s no hint that they’re a modern group. Yes, they’re clearly British (though when they sing, they sound closer to The Byrds), but mentions of AM radio stations and such offer not a single clue to the tender age of the band.

In retrospect, now knowing what I know, there is one characteristic of the band that might have tipped their hand as being a current group: the drumming. The heavy (but pleasing and effective) use of aggressive snare rolls suggests a drummer who’d be every bit as comfortable providing the backbeat for a band evoking the sound of Sugar or Hüsker Dü (the latter of whom, did, after all, cover The Byrds’ “Eight Miles High”).

Seventeen songs (including the three “ad” spots) and nary a stylistic step outside the sixties. So if you’ve exhausted your excursions through Nuggets, Pebbles and the like but want more in this style – and who in their right mind wouldn’t? – The Higher State should be your next stop. And remember what the sticky-note tells us: it’s available exclusively from your friends at Kool Kat Musik.