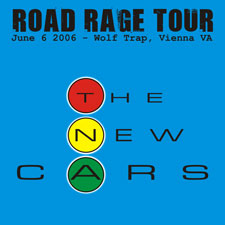 By 2006, everything seemed to get recorded. From every single date of David Gilmour‘s solo tour, to a Peter Tork set with his blues group in a Dallas bar, tapers are there, and generally with ace equipment to capture the night for posterity.

So it was that an intrepid taper captured this set, days before the temporary suspension of the tour (due to guitarist Elliot Easton‘s broken clavicle). And while some true believers took issue with the Todd-Rundgren-fronted version of the New Cars (founder Ric Ocasek was not involved in the project) viewed on their own merits, the New Cars could deliver the goods, and help listeners relive the 80s for an hour or two.

The set list offers up most of the expected vintage material, along with a few surprises from Todd that work well recast in a Cars mold (especially Todd’s “Black Maria”). The new New Cars track “Not Tonight” blends in seamlessly, and is among Rundgren’s more memorable compositions of late.

Easton and keyboardist Greg Hawkes (the man arguably most responsible for the distinctive Cars sound) are joined by Rundgren and two of his pals, bassist/vocalist Kasim Sulton (Utopia) and drummer Prairie Prince (Tubes, several Todd projects). The players get their parts right, and seem to be having a great time to boot. Other shows on the tour — at least two others have been booted — sometimes included Nazz‘s minor hit “Open My Eyes,” but the Wolf Trap curfew kept the band from playing that encore number.

The audience recording is of average overall quality. The sound is clear, but guitars are bit distant, keyboards sometimes disappear in the mix, and vocals are a bit on the boomy side.

Difficulty to Locate: 3 out of 10
General Listenability: 7 out of 10