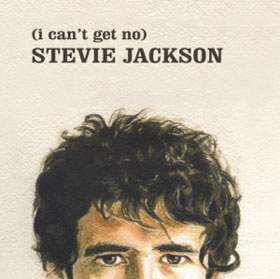 Belle & Sebastian have long been critics’ darlings, and for good reason. Never the most prolific of groups, the Scottish pop outfit has focused instead on creating works of merit and enduring value. A fairly large group – seven players – Belle & Sebastian nonetheless crafted economical, direct ear-candy pop songs in the tradition of Squeeze and Teenage Fanclub, albeit with a softer edge (some might call them “twee”). Guitarist Stevie Jackson has been with the group since their early days (the mid 90s) and has stepped out for a solo project, clever titled (I Can’t Get no) Stevie Jackson.

The similarities to the Rolling Stones pretty well end right there with the title, however. Sporting a musical approach not wholly dissimilar to his main group, Jackson leans a bit more on keyboard textures for the twelve tunes on what we’ll call (for economy’s sake) Stevie Jackson. The drawing-room piano of “Pure of Heart” anchors a lovely tune that seem to concern itself with everyday life of a British teen. On the Small Faces-ish “Just, Just So to the Point,” Jackson builds a subdued, slinky tune around a simple Wurlitzer Electric Piano riff; the result is vaguely similar to some of Neil Finn‘s solo work.

On “Try Me,” Jackson rocks out. An infectiously poppy song (with keyboard flourishes that sound straight out of – surprise! – a Belle & Sebastian record), its chugging electric guitar and insistent tom-tom work leads into a mod guitar solo. But for “Richie Now,” Jackson crafts a lilting pop tune imbued with a gentle Merseybeat flavor. That flavor is hammered home by lyrics that mention the year 1963, and chiming guitar figures.

The breezy, waltzing pop of “Dead Man’s Fall” features some shimmering “doo-wop-a-bop” backing vocals that elevate what was already a pretty fetching melody to start with. The gentle acoustic textures of “Bird’s Eye View” feels like Donovan, or Flight of the Conchords without the comedy. “Man of God” brings back the homespun piano textures, applying them to a should-be-a-hit melody; it’s the most Belle & Sebastian-sounding track on Stevie Jackson. The string arrangement and subtle pedal steel work are icing on the cake.

The folky (UK-style) “Kurosawa” evokes visions of the Highland mists. “Where Do All the Good Girls Go?” makes effective use of handclaps, an evokes a singalong vibe.” The longest track on Stevie Jackson, “Telephone Song,” still keeps under the five-minute mark; Jackson’s pop instincts are always brought to bear on the songs, even on this, the most dreamily textured song on the disc. “Press Send” is the goofiest track on the disc, full of sweet, heart-on-the-sleeve sentiments concerning email messages. Its backing chirps of “don’t send / do send” are a delight, and the rollicking piano and intentionally-thin lead guitar suit the tune perfectly. The brief, countryish “Feel the Morning” wraps things up in tuneful fashion; it sounds like a high-quality outtake from Wings‘ Wild Life, if you can imagine such a thing.

To sum up, allow me to engage in the most obvious bit of wordplay: get yourself some (I Can’t Get No) Stevie Jackson. You won’t be disappointed.