Here in my adopted hometown of Asheville, NC, there’s something of a modern-day annual tradition. Every year ’round this time, the local Fireman’s Association does a fundraiser. Now, this being the South, they have to use the word “association.” Because if they called themselves what they really are, they would probably find themselves unable to raise funds. You see, even though the proceeds go toward a fund to aid brave men and women injured in the line of duty – y’know, protecting us – and whatnot, that wouldn’t matter to a lot of people who have an irrational antipathy toward unions. 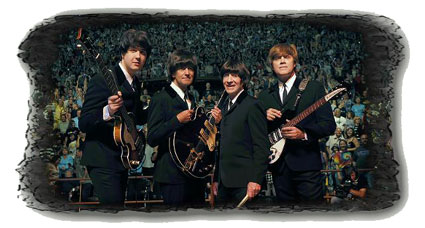 Anyway, and back on topic, the fundraiser is usually based around the selling of tickets to a concert featuring some manner of nostalgic act. And as it happens, in the last twelve years – I haven’t gone every year – there have been some mightily impressive performers. Gary Lewis, for one, put on a show exponentially better than anyone would have a right to expect. Felix Cavaliere‘s current lineup of Rascals gave a high energy, memorable show that had people alternately cheering and crying. And The Association were pretty swell, too.

Right up there with those high-profile acts, however, is an act whose name may or may not ring a bell for you: 1964: The Tribute. As you can readily guess, they’re a quartet that recreates the early Beatles repertoire (roughly up to A Hard Day’s Night actually up to Revolver), and they do it in style. The sonic presentation is, well, uncannily accurate. Take it from me: I saw Beatlemania in the 70s when Marshall Crenshaw was in the cast. Anyway, 1964: The Tribute are really good. Their current tour brings them to Knoxville TN on Friday, August 10, at the The Tennessee Theatre. If you’re within driving distance, go see ’em. And if not, check their schedule for another date near you. And either way, check back on the Musoscribe blog soon for an interview with the band.