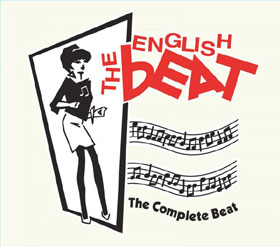 The Complete Beat is more than a comprehensive collection of the recorded output from The English Beat. It’s the sound of a band constantly moving forward. Right out of the gate on their 1980 debut I Just Can’t Stop it, the Beat (as they were known everywhere but the USA, where “English” was appended to differentiate them from Paul Collins‘ nervy powerpop band) delivered a sound that was fresh and new. Best described as ska or bluebeat, The English Beat’s music drew from Caribbean sounds (mostly reggae) but wedded those to a kinetic, highly-charged style that was just right for dancing. Or pogoing.

Displaying more musical variety on the album’s twelve songs (boosted to fourteen on the first disc of The Complete Beat) than would be typical of most reggae music, the band kept things going fast, furious and mostly upbeat. An ace cover of Smokey Robinson & The Miracles‘ “Tears of a Clown” (one of the two bonus cuts on the first disc) may be the band’s most well-known early track, but the album is consistently engaging.

By the time of 1981’s Wha’ppen? The multiracial sextet had broadened their approach a bit, drawing in more reggae stylings, leavening the approach of their chosen genre with some slower numbers. No major hits would be forthcoming from the sophomore release, but tracks like “I Am Your Flag” show that the band had plenty of quality music on hand.

The band truly broke through in America with their third – and most varied – release, 1982’s Special Beat Service. Almost equal parts reggae, dub, ska and pop/rock, Special Beat Service drew on the best elements of each genre, and blended them seamlessly into a winning formula. “Save it For Later” became the band’s biggest hit, but Special Beat Service is full of tracks that approach the quality level of that hit.

But that was it* for The English Beat. Three records and out: four of the six members would soon resurface in two other bands (Fine Young Cannibals and General Public) that mostly tread ground that The English Beat had expertly covered earlier. The new Shout! Factory five-disc set The Complete Beat collects the group’s three records, adding a total of ten bonus tracks (mostly single a- and b-sides) to those discs. But it doesn’t stop there: an included 2CD set called Bonus Beat collects an entire disc’s worth of 12” and dub versions, and the second disc brings together three Peel Sessions dates (from 1979, 1980 and 1982) plus a short set recorded live in 1982 at Boston’s Opera House.

Not only is The Complete Beat all the English Beat you could ever want, it’s all that there is. A sturdy box, a nice booklet full of vintage photos and Alex Ogg‘s knowing essay all serve to make the set even better. Each individual CD case containers additional liner notes and full lyrics so you can sing along while you dance.

* Well, not quite. Original members Dave Wakeling and Ranking Roger have subsequently – over the years – both toured with different bands called The English Beat, and they’ve done so with each others’ tacit approval. And at this writing, The English Beat are concluding a roughly-30-date run of shows in concert halls across the United States. No word on the likelihood of any new recordings from the reformed group.