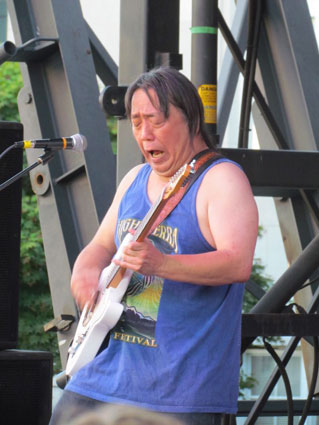 Live performance and studio output are two wildly different things. Some bands are adept at crafting carefully-put-together studio albums, but when they take to the stage, they’re lifeless and stiff (or worse, show to be incompetent on their instruments). Other acts are engaging onstage, but seem never able to capture the excitement of live shows on their recordings. (The Grateful Dead are perhaps the most oft-cited example of the latter.)

So when a band that is equally compelling both in record and onstage, it’s a remarkable thing, and well worth noting. New Orleans-based Papa Grows Funk is just such a band. The five-piece outfit held down a prominent spot on the Saturday lineup of Asheville NC’s 2012 Bele Chere Festival.

On record, Papa Grows Funk delivers an array of, well, funky sounds. Drawing from the deep and rich talent pool of their native New Orleans, PGF can sound like Wild Cherry or Average White Band one moment, Earth Wind & Fire the next, and – especially when Jason Mingledorff‘s saxes kick in – like the N’awlins players they are. But the most distinctive sonic element of the band is provided by its leader John Gros when he wails on the Hammond B3 organ. 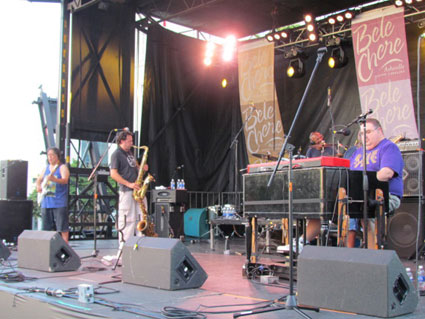 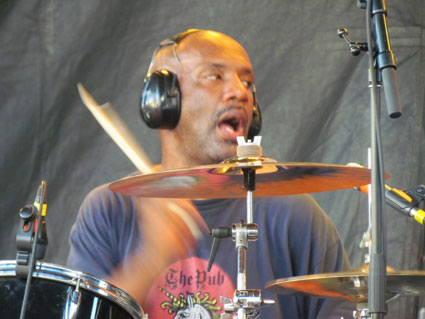 Onstage at Bele Chere, Papa Grows Funk whipped the crowd into a funk frenzy as they ran through tunes from their catalog, including 2012’s Needle in the Groove, produced by New Orleans legend Allen Toussaint. Gros’ clavinet work on “Yes Ma’am” called to mind Stevie Wonder and Led Zeppelin all at once. The group’s 90-minute set on the Battery Park Stage allowed them plenty of time to stretch out and get well into the groove; each player took his turn in the spotlight. But the most thrilling part of this mostly beat-centric band was an extended duet between Gros on organ and Mingledorff on saxophone. While the other players held back, the two wove lyrically musical lines around each other for a tasty – and times ethereal – instrumental interlude.