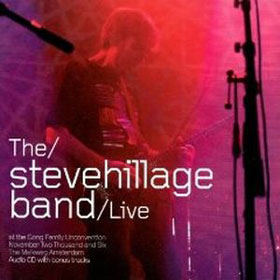 Steve Hillage was (and/or is) the guitarist from British/European hippie collective Gong. Always possessed of a mystical bent, Hillage’s songs straddled the space between psych-jam and wide-eyed folike sensibility. His music is as likely to feature loopy analog synth bleeps as it is to deal with subject matter you’d expect from Syd Barrett or Robyn Hitchcock. He’s an impressive and entrancing guitarist who makes intelligent (and non-clichéd) use of any number of effects pedals. His voice, however, is a somewhat limited instrument. His longtime partner Miquette Giraudy provides wacky synthesizer backing – especially tasty and textured on a cover of the Beatles‘ “It’s All Too Much” – but her vocals – at least as represented on this live document – are even more, er, humble than those of Hillage.

But fear not: the focus of this 2006 live recording is mostly on the music. The extended “Solar Musick Suite” is particularly exciting. Hillage’s music and sensibility foreshadows the musical approach of Ozric Tentacles, though Hillage’s music leans a bit more in a pop direction. A companion DVD version of this set (with a slightly different set list) is also available. After an extended period out of the music and performance scene, Hillage’s Live is a welcome return (and return to form).