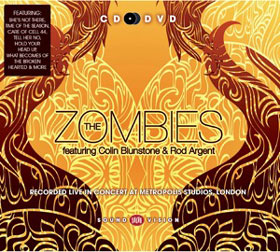 The Zombies are one of those sixties acts who somehow never got their due on the first go-round. Chalk it up to bad timing, a glut of great music; it really doesn’t matter or change the facts. The Zombies produced one of the great baroque-pop albums in Odessey and Oracle, but weren’t around to capiltalize on its success once it caught on. (Imagine, if you will, that Radiohead had broken up six months after releasing OK Computer, another landmark record that made a slow burn on the charts.)

The surviving members of the original Zombies lineup reunited in 2008 to mount live dates in which they re-created Odessey & Oracle, and that got them back onto the touring circuit. The touring version of the group doesn’t include all of those guys, but it does feature extraordinary vocalist Colin Blunstone and ace keyboardist Rod Argent. Also on board are bassist Jim Rodford (a member of The Kinks during their resurgence in the 1980s) and son Steve Rodford on drums. Guitarist Tom Toomey shows he belongs with these highly-regarded players, especially on his solo during “Any Other Way.” That song’s charms are more amazing when one discovers it’s a new (2011) track, not a sixties classic. A performance of Denny Laine‘s bouncy “Say You Don’t Mind” (a solo hit for Blunstone in the early 70s) and a lovely version of George Gershwin‘s “Summertime” show the range of these veteran musicians. Thank goodness they’re still at it.

This new CD+DVD touches on a number of O&O tracks, but also delves into the group’s other material. The performances are shockingly dramatic and tight; there’s nary a whiff of nostalgia, no feeling of old guys trucking out the old stuff. Blunstone’s voice is as controlled and expressive as ever, and Argent’s Hammond and piano talents are second to few. The session took place in front of a crowd of 120 souls, and the result combines the best characteristics of studio (clear sound, careful arrangements) and live (that ineffable vibe a band gets playing to a real audience). Recorded Live is perhaps the best contemporary live performance/recording by an “old” band since Love’s Forever Changes Live.