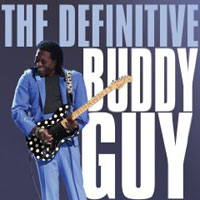 It’s often dangerous to make generalizations, yet sometimes doing so is an effective method to put things in context. With that caveat, I suggest that among some of the giants of the blues (including BB King, John Lee Hooker and Muddy Waters to name a few), the blues of Buddy Guy are among the most urban. His fleet-fingered playing and wailing, expressive vocal embody the Chicago variant of the electric blues. In many ways — though he’s a blues artist through and through — his catalog is the most accessible blues entry point for rock fans; there’s a rock attitude in his approach that makes his music feel familiar to listeners steeped in the rock tradition. His playing will sound familiar to fans of Eric Clapton, Stevie Ray Vaughan etc., but it’s important to note that it was he who influenced them.

And it’s doubtless for those rock fans that Shout!Factory is aiming its single-disc retrospective of the man’s work. The Definitive Buddy Guy is a 17-track, single-disc summation of Guy’s career, and it’s the first single-disc set to try and sum up and distill his catalog. In many was, since Buddy Guy’s career is so closely entwined with that of Junior Wells (vocals and harmonica), this set offers a useful introduction to Wells’ oeuvre as well. On “Hoodoo Man Blues” Guy’s guitar is run through a rotating Leslie speaker; while that effect is now commonly recognized (most famously used on George Harrison‘s solo of the single version of the Beatles‘ “Let it Be”), in 1966 it was pretty innovative stuff. Because of contractual restrictions, Guy was often credited on Wells’ recordings under the cute pseudonym of Friendly Chap.

Furthering the rock connection (which is not meant to denigrate Guy’s status as a consummate and seminal bluesman), it’s worth noting that Eric Clapton’s then-current group Derek and the Dominos backed Guy and Wells on the 1972 LP Buddy Guy and Junior Wells Play the Blues. “A Man of Many Words” from that disc is included here; the track also features Dr. John on piano. (And just to tie things together for trivia buffs, Derek & Co. played on George Harrison’s All Things Must Pass album from the same era.) Nearly every important rock guitarist has gone on record with effusive (and well-deserved) praise for Buddy Guy.

Guy’s guitar and arrangement style lends itself to the live stage, so the compilers wisely included four live tracks. “I Got My Eyes On You” dates from a 1968 show, and features a tight horn section; the number swings and swaggers, leaving the listener wanting more. And ultimately, that’s one of the functions of a compilation such as The Definitive Buddy Guy. Introduce people to the artist’s work, provide context in the form of excellent liner notes and track info (personnel and release date) and point the way to find more of that artist’s work. This set succeeds on all of those counts.

And to anyone under the mistaken impressions that (a) Buddy’s resting on his laurels or (b) the blues is no longer a living, evolving form, take a listen to the disc’s final track: the heavy, heavy “Baby Please Don’t Leave Me” from Buddy’s 2004 release Sweet Tea. As of this writing, the 75-year old multiple-Grammy®-winning artist and consummate showman still plays live.