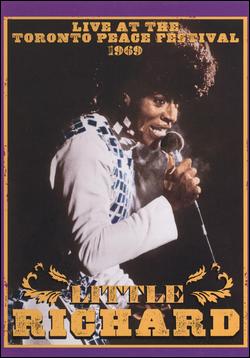 In retrospect, one shouldn’t have any right to expect a show-stopping performance from Little Richard in 1969. He was more than a decade past the apex of his career and popularity. But on this night, no one told that to him or his festival audience in Toronto. The band is as tight as can be, and befitting the stature of their front man, they are placed (literally) well out of the spotlight (“No lights on the stage!” Little Richard instructs the lighting crew.) He offers up his shoes as if they are sacraments, and the crowd eats it up one hundred percent.

D.A. Pennebaker and his team film the proceeding expertly in his trademark cinéma vérité style. The cameras keep the focus squarely on Little Richard, who’s resplendent in a mirrored tunic; during “Good Golly Miss Molly” the cameras capture the tunic in a way that makes it look almost alive, or computerized, or something.

After a brief opening “Blueberry Hill,” the band engages in a furious, frenetic pace that lets up not once. “Jenny Jenny” features undulating hippie dancers onstage. With Little Richard shirtless for the final number of “Long Tall Sally,” the band speeds it up even more, blasting through the number at a pace that would make the Dead Kennedys blush.

Little Richard’s set is brief — roughly 30 minutes — but he involves the crowd and like an expert prosecuting attorney, he makes his (musical) case forcefully, convincingly and with great economy. Grinning all the while like Caesar Romero‘s Joker, he keeps the pace going, and when the last note fades, there’s nothing left to say. Condolences to whatever performer had to follow this act. Essential viewing.

Note: John Lennon and the Plastic Ono Band were on the same bill; that performance was also filmed; here’s a review.