If you’re the sort of person who sits around pondering odd musical juxtapositions, one of the unlikely combinations you might dream up could be: What would it sound like if Fleet Foxes were backed by Crazy Horse? Well, while the answer to that might be subtly suggested on Strange Land, the sophomore release from Yellow Ostrich, the real answer could be found onstage at a Yellow Ostrich performance. 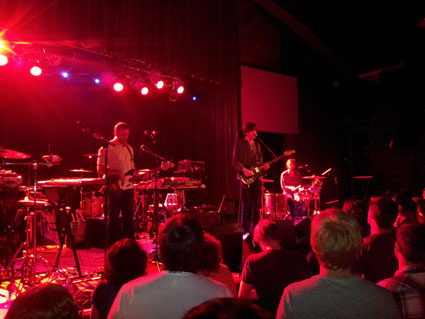 At least that was the case in mid June 2012, when I witnessed a set by the NYC-based trio. Using a nominal “power trio” format, the band actually moved well outside that structure. Jon Natchez spent the set switching deftly between bass, synthesizer and horns; serving as the band’s “utility man” it was generally Natchez who was responsible for giving each song its own personality. Leader Alex Schaaf took center stage on guitar and vocals, and drummer Michael Tapper brought a jazz sensibility to the band’s sound, with sparing (and this more effective) hits on his cymbals.

The opening-act status of the band worked to their advantage in an important way: had they been given the entire stage, the may well have positioned themselves in the standard places, with Tapper in the back/center. But because headliners Los Campensinos (a lively seven-piece Welsh outfit) required so much real estate, Yellow Ostrich set up right along the far front-edge of the Orange Peel’s stage. What that meant is that visually, all three band members got equal billing. And that worked to their advantage, due in large part to Tapper’s drum work. 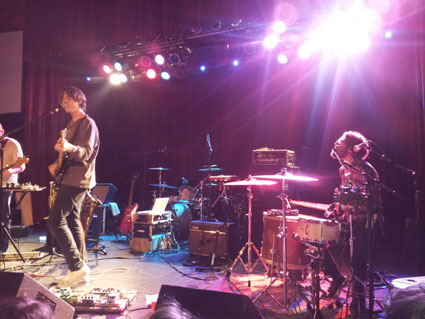 Schaaf’s somewhat yelpy vocal style will sound familiar to fans of the aforementioned Fleet Foxes (not to mention any number of other current indie acts), but it’s the heavy rocking attack of the trio –onstage, at least – that set them apart from their more wispy-sounding contemporaries. The young crowd – most of whom must have been dropped off at the Orange Peel by Mom or Dad – was very recetpive to the band’s music, and the venue’s typically excellent sound mix meant that the intricate vocal harmonies (by all three band members) were clearly heard above the pleasingly thundering instrumentation.