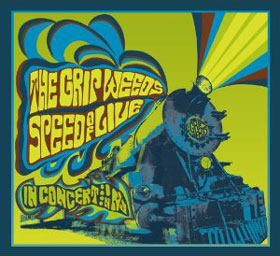 Here’s how it usually goes: when you hear that one of your favorite bands is releasing a live album – let’s say it’s called Speed of Live – and that at roughly the same time, they’re also putting out a DVD called Live Vibes, you make a couple of assumptions. One is that the two are connected. Possibly the audio and video are the same concert, provided in two formats.

Another assumption follows from that first one: you probably don’t need both. In fact, depending on the band, you might make the calculation – love them though you do – that live versions of their songs aren’t necessarily worth your shelling out your hard-earned cash. Sure, you’d go see them if they came to your town, but live versions of studio songs? Those can be an iffy proposition. Taking The Who as but one handy example, for every stunning 2LP Live at Leeds there’s an overblown and lifeless 3LP Join Together: Live Performances from the 1989 U.S. Tour.

But those presuppositions are worth setting aside when it’s The Grip Weeds we’re talking about. Yes indeed: Speed of Live is a wonderfully recorded, energetically played live document culled from (relatively rare, it should be said) onstage Grip Weeds shows. The fifteen cuts are sourced from four different dates between 2007 and 2010, and three of the strongest performances come from a date at The Court Tavern, adopted home of that tri-state area-based American treasure, The Smithereens.

The performances are intimate, club-like, befitting the, er, vibe of The Grip Weeds. As with the best live albums, there’s a certain immediacy to the live versions of songs like “Close to the Sun” and “Salad Days.” And “Love’s Lost on You” proves that the group’s finely-tuned, tight arrangements are no mere studio trickery. With the high-gloss sheen of the studio stripped away, the raw power of the songs shines even more brightly. True, the sonic depth is less evident, but it’s more than offset by the you-are-there feel of the recordings. And just to tie thing nicely back to our Live at Leeds citation, The Grip Weeds bash through “Shakin’ All Over.” (They also stomp their way through “(So You Want to Be A) Rock ‘n’ Roll Star,” and nail both the vocal harmonies and the extended guitar solo.) 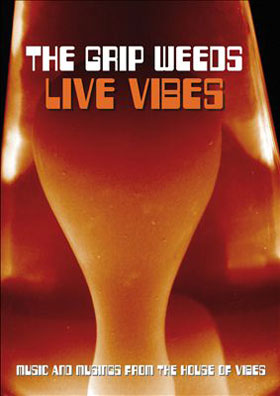 Live Vibes is an altogether different affair. Despite its name, this hour-long DVD is not an audiovisual document of the music on Speed of Live. No, it’s a rather more routine (yet equally pleasing) presentation that hearkens – in more ways than one – back to early days of MTV. The quartet is seen running through select songs from their catalog, set up in a room in their aptly-named home studio, the House of Vibes. With some tapestries hung on the wall, a strategically-placed lava lamp, and some blobby liquid projections a la Syd Barrett-era Pink Floyd, The Grip Weeds play live-in-the-studio (sans audience) versions of nine of their best songs. In between, viewers are treated to pearls of wisdom and reflections upon the creative process etc. by each of the four Grip Weeds.

The video production has a curiously dated feel: some of the post-production techniques all but scream “1985!” (I know: my band of that era used some of the same effects in our own hilariously self-important documentary that very year). The result, juxtaposed as it is against The Grip Weeds in their retro finery, is redolent of nothing so much as the Paisley Underground bands. Perhaps not quite the feel they were aiming for, but no harm is done.

The singing and playing is stellar – this is The Grip Weeds, after all – and of course the songs are top-notch. Special notice goes to “Telescope” and “We’re Not Getting Through.” In the interview parts, the band liken the setup to the Floyd’s UFO shows. That might be stretching things a bit; it looks more like the set of the “Wayne’s World” SNL skits. But for Grip Weeds fans, the DVD remains essential viewing, especially seeing as it includes four MTV-style music videos as bonus material. But because it’s not in fact a live/onstage extravaganza with all of the concomitant excitement, it’s perhaps not the sort of DVD that will enjoy multiple repeated viewings.

A quick but important aside: After an extended dry period with no new releases (2004’s Giant on the Beach was for many years their most recent offering), The Grip Weeds came roaring back at the tail-end of the new century’s first decade. In 2010 they released not only an album, but a double-album, Strange Change Machine. In 2011 they released a Christmas-themed album. And now in 2012 there’s this live album and DVD. It would seem that The Grip Weeds are making up for lost time.

But back to these new releases: Speed of Live (the CD) is a must-hear for Grip Weeds fans and anyone who enjoys the straight-ahead powerpop-with-oomph-and-finesse that characterizes the best music in the genre. Live Vibes (the DVD) is well worth viewing, but probably will find ardent admirers only among the most hardcore of Grip Weeds fans. Those hardcore fans will indeed need both. For most others, Speed of Live is the one to get.