Album Review: The Sugarman 3 – What the World Needs Now 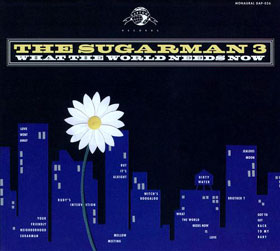 I first caught notice of the (for lack of a better term) boogaloo revival a scant few years ago when I first heard The New Mastersounds. That group’s instrumental attack drew upon what the British call Northern Soul, folding in healthy helpings of Memphis style r&b a la Booker T & the MG‘s. Once I got hip to (and interviewed) them, I followed the trail where it led; I learned about the venerated DJ Keb Darge,curator of a long list of deep-groove collections. I found an actual (and quite wonderful) Memphis group, The City Champs. And of course everyone knows about Sharon Jones & the Dap Kings, and such modern practitioners of that classic soul r&b/soul sound as Fitz & the Tantrums and Mayer Hawthorne. The wave continues with bubbling-under acts like The Right Now. In short, these are good times for soul/funk/r&b revival styles.

It’s a given that the musicians who play this kind of music have a deep sense of history; it’s all but a prerequisite: if they lacked that depth, we’d detect the deficiency in the music and promptly call bullshit on them. So it’s perhaps not a surprise that both The City Champs’ guitarist Joe Restivo and The New Mastersounds’ Eddie Roberts both name-checked The Sugarman 3 as favorites and big influences; that NYC trio was pretty much first on the revival scene.

But the recording history of the group as such – namesake Neal Sugarman on sax, Adam Scone on organ, and drummer Rudy Albin – started in 1998 and ended four years later. They went on to back Sharon Jones, but as a recording unit, it seemed their days were over. Happily, this is not so.

2012 saw the release of What the World Needs Now, the first new release from The Sugarman 3 in a decade. And, as the saying goes, it’s like they never left. With the original lineup intact (or re-formed, depending on your point of view) and augmentation by familiar friends, What the World Needs Now is a return to form, so to speak.

Every bit as good as – and not very different from – their brief string of turn-of-the-century albums, the new set flies by quickly. In addition to the group originals (all of which deftly maintain that tight-yet-loose feel so essential to the style), The Sugarman 3 tackle a pair of noteworthy covers. The Standells‘ garage classic “Dirty Water” gets a boogaloo reinvention here, and Burt Bacharach‘s classic (the title track) gets covered as well. The choice of the latter is remarkable in its own way: Bacharach’s songs are quite complex structures, and are already heavily imbued wit a jazz sensibility (if not outright jazz itself). So adapting a number like “What the World Needs Now” into an irresistibly danceable style is tougher than it might seem; the primitive “Dirty Water” is a more logical (and easier-to-pull-off) choice. The thing is, in the expert hands of The Sugarman 3, both work, and well.

From the retro-styled cover art to the recording aesthetic (8-track analog, mixed to bright and glorious mono) to the arrangements, this is one album that engages in truth in packaging: it really is What the World Needs Now.