Bootleg Bin: The Long Ryders – State of Our Union Outtakes 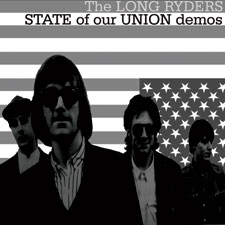 The Long Ryders were twenty years ahead of their time. With their defiantly countrified rock and roll, they embodied the alt-country ethos long before that term would be coined. At the peak of their powers, they released their 1985 LP The State of Our Union.

That album’s populist political messages were in sharp contrast to the prevailing winds. The Long Ryders’ songs dealt with themes at once personal and universal. The lyrics could look back one moment (“WDIA,”) and offer a glimmer of hope the next (“Good Times Tomorrow, Hard Times Today”). Yet most of the songs dealt with the here-and-now. There was melodrama, wistfulness and optimism within the album’s forty-odd minutes.

In advance of the album sessions, demos were cut in June 1985. Those demos comprise the bulk of the State of Our Union Demos bootleg disc. These versions offer valuable insight into the development of the songs’ arrangements. Of even greater interest are the two songs left in the can, “Southside of the Story” and “Child Bride.”

For country aficionados, both the legit b-side and a hissy demo of “If I Was a Bramble And You Were a Rose” are included. The demo version features scenesters Debbie Peterson and Will Glenn.

Sound quality is good-not-great, suggesting that this collection made its way through the hardcore collector circuit of tape traders in the pre-CDR days, finding new life — as are the populist messages of “State of Our Union” — in the 21st century. It’s not a moment too soon for either.

Difficulty to Locate: 7 out of 10
General Listenability: 8 out of 10