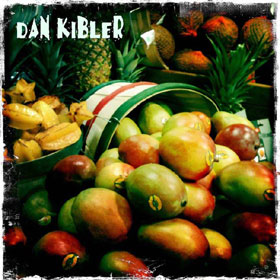 I will readily admit that alt-country doesn’t rank among my favorite musical genres. I respect it, sure, but in general, it gives me no particular pleasure. I’m more of a rock guy. But – as with nearly every style of music – there exist artists who somehow transcend their style (for me, anyway) and produce something with which I can connect emotionally. And on occasion, the music of that artist will, over time, provide a musical doorway of sorts into a heretofore unappreciated style of music.

I don’t know if Dan Kibler‘s new album (conveniently titled Dan Kibler) will lead me to the twangier side of the tracks, but his album is a winner, no matter how you classify it. From the opening riff of “The Misunderstood,” it’s clear that Kibler weds a breezy, dusty-road sort of twang-rock to a powerpop sensibility. Think of Tom Petty, Bill Lloyd and early BoDeans, and you’ll have an idea of the sort of music Kibler creates. Memorable hooks, straightforward, out-front vocals, and an emotional point of view that straddles world-weary and wry bemusement.

The country tradition of story-songs is successful for good reason; listeners like to connect with characters in musical stories, especially if there’s something about those characters that resonates. If they’re well-drawn, listeners can relate. And Kibler excels at this approach: “When Johnny Comes home” is a fine example. While it doesn’t rock as hard as, say, a Jason and the Scorchers tune, the song makes up for it with subtlety and strong vocal harmonies. And Kibler wisely under-develops the characters, leaving listeners space to fill in the blanks, thus making the character more their own.

“Another Day” may be a shopworn title for a song, but Kibler’s take on it – complete with lovely pedal steel courtesy of Sal Saunders – evokes pleasant memories of Long Ryders in their prime. “Broken Bent and Bound” employs some sly guitar figures from the Byrds/George Harrison school, and applies them to a driving, windswept melody with big, twangy cowboy electric guitar riffs.

“Come Back” takes a left turn from the country styles, kicking off with a backward guitar intro. But then it settles into a midtempo style with plaintive lyrics. Tony Melchiorre‘s 60s-psych flavored drum fill leads into a simple, tasteful/tasty guitar solo from John Fritchey. (It’s not credited on the album, but I am pretty sure I hear some nice fiddle work buried in the mix.)

Like all of the songs on Dan Kibler, “45 Seconds More” benefits from its memorable melody; it’s also the least country-flavored track on the set. The waltzing rock of “Jealousy” comes with a parental advisory, but don’t worry: Kibler’s no 2 Live Crew, and his brief four-letter lyrical excursions make sense in the song’s context.

Kibler and band turn up the twang – and even mention train whistles – on the lovely, loping “Is it True.” The fetching chorus is the track’s highlight. “I Can’t Make Up My Mind” is another stylistic departure: it opens with stacked vocal harmonies and then shifts into a riffy rocker not miles from The Smithereens. It’s worth noting that Kibler has always drawn from whatever stylistic bag made sense to him: back in the late 90s he contributed an ace cover of “Trains and Boats and Planes” to the tribute album What the world Needs Now: Songs of Burt Bacharach.

Power pop with twang – reminiscent of Spain-by-way-of-Virginia group The Mockers – is on display in “Never Good News,” and again the vocal harmonies and lead guitar are icing on the cake. The trilling piano figure that anchors “Rock’n’Roll Rome” calls to mind Bruce Springsteen. But the slide guitar (especially on the soaring solo) moves the feel closer to Old 97s, and the end result is a song with its own distinctive, winning personality. The record closes with the breezy “Frak Day Comer,” a number reminiscent of Harry Nilsson and other wide-appeal 70s artists.

And that wide appeal is, in the end, the hallmark of this entire record. Dan Kibler is that rarest of albums: one that rock fans who don’t really like country – as well as country fans who don’t dig the rock – can both enjoy, and even treasure. A winner.

Important Note: While Dan Kibler is available from most of the usual outlets, a special bonus disc titled What’ll It Be: A Dan Kibler Mixtape is available only when you buy the record from Kool Kat Muzik’s online store. The bonus disc is a nine-track career retrospective put together by Kibler himself.