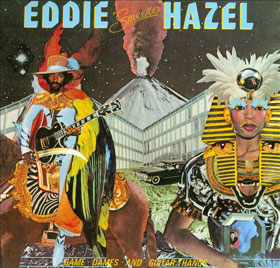 Here’s an odd one. Funk guitarist Eddie Hazel – part of the highly-esteemed Parliament / Funkadelic family – released his own solo LP in 1977. And while he’s most often associated with the soaring, blistering metallic axework with which he dazzled listeners on such discs as Funkadelic’s 1971 Maggot Brain, on Game, Dames and Guitar Thangs, he’s generally more intent on settling into a groove.

But it’s a tasty groove indeed. The seven-track album is book-ended by a pair of versions of “California Dreamin’,” a song strong enough to work in virtually any idiom (Paul Revere and the Raiders offshoot power trio Brotherhood cut a heavy-rocking version in the 60s that owes a stylistic debt to Vanilla Fudge).

Hazel lays back and tears out a nonstop solo during “California Dreamin’,” yet he’s never exactly out front with his guitar here; instead he’s content to let the arrangement stand on its own. Ghostly female chorus vocals form the foundation of “Frantic Moment,” a funky number with all manner of music things bubbling under; at times it sounds like a bizarre cross between Stevie Wonder, Frank Zappa and Mahavishnu Orchestra. But with a Bootsy Collins bass solo!

Hazel rips it up with soaring, echoey, feedback guitar leads on “So Goes the Story,” a stuttery song that recalls Overnite Sensation Zappa, this time with a bit of Isaac Hayes influence thrown into the mix. A funk cover of The Beatles’ “I Want you (She’s So Heavy)” might not read on paper like a good idea, but in Hazel’s capable hands – again, with expert backing from his P-Funk comrades – it makes perfect sense. The female chorus handling the vocals (Brides of Funkenstein) is reminiscent in spots of Patti Labelle‘s 70s work. And even at nine-plus minutes, it never fails to hold the listener’s interest.

On “Physical Love,” Hazel shares lead guitar duties with P-Funkster Garry Shider, but one of the pair (Hazel, I think) is often curiously low in the mix. The instrumental number is largely an excuse for a bunch of guitar noodling, but that’s not a bad thing. Some tasty piano and synth work from Bernie Worrell adds excitement. On “What About It?” Hazel shares leads again, this time with Mike Hampton. The result is a thrilling sort of Wes Montgomery-on-funk jam. A brief dub-flavored reprise of “California Dreamin’” closes the record, putting the emphasis on chanted vocals and thumping bass.

A Real Gone Music 2012 reissue of Game, Dames and Guitar Thangs features a contemporary essay from Ed Osborne; Osborne’s piece provides useful history and context to help listeners new to Hazel’s work better understand and appreciate this guitarist. Long plagued by drug and alcohol problems, Hazel passed away in 1992, leaving this album as his only official release (though some worthwhile posthumous compilations do exist).