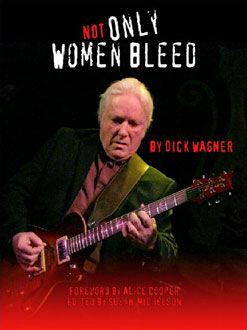 I’m decidedly old-school about any number of things. I prefer vinyl records to CDs (and CDs to mp3 files), and real books to e-books. But when I learned that famed and legendary guitarist/composer Dick Wagner had penned a book about his life in music, and that Not Only Women Bleed would be available only in digital format, I scoured my local Craigslist for a used Kindle.

I found one, and took Wagner’s e-book along on a recent road trip from my home in Western North Carolina to metropolitan New York City and back. (My adult kids did their share of driving, giving me plenty of time to read on long stretches of highway.)

The book’s title refers, of course, to Wagner’s most famous co-write, Alice Cooper‘s blockbuster hit “Only Women Bleed.” Now, beyond that, Wagner’s choice of title has precious little to do with the book’s content. Definitely not a traditional autobiography, Not Only Women Bleed is, instead, a collection of brief vignettes – something like 180 of them – arranged in a loosely chronological order. And by “loosely,” I pretty much mean, “Not.” These chapterlets – some only a mere page or two in length – have the feel of sitting-at-the-bar anecdotes, of the “Did I ever tell you the one about…” variety. Which isn’t to say they’re not fascinating. Many of the stories are quite entertaining, and most are valuable thanks to being told by the guy who lived ’em. But a few do suffer from the author’s occasionally score-settling point of view.

Readers looking for sex, drugs and rock’n’roll won’t come away empty-handed. Admirably, Wagner has put his self-described addictions behind him, but one can often imagine him sporting a sly grin as he recounts lurid tales with this or that groupie. Fair enough. Not Only Women Bleed is unalloyed in Wagner’s recounting the ups and downs of his personal life, and if he has any temptation to blame others for any poor decisions he might have made in his sixty-plus years, he keeps it firmly in check.

Those interested in the nuts and bolts of song composition, recording techniques, live performance etc. might be disappointed a bit with Not Only Women Bleed; it’s more of a personal non-chronological chronology. There are chapters on Wagner’s early bands (most notably The Frost), but when one sees that there’s a one-page chapter titled “Alice Cooper,” it’s clear Wagner’s not going in-depth. He touches on his time with Lou Reed – the period in which Wagner and Steve Hunter created one of the greatest and most thrilling instrumental pieces of rock, the transcendent guitar-duel intro to the live version of “Sweet Jane” that appears on Rock’n’Roll Animal – but readers never get much of a sense of what it was like for Wagner to work and tour with Reed.

It’s important to state once again that I enjoyed the book, enjoyed the stories, and for the most part enjoyed Wagner’s style of telling those stories. But the book’s fragmentary nature, and the gaps that a journalist would have sought to fill and/or connect – left me wanting much more. In the end, the self-published Not Only Women Bleed may cause some readers to say to themselves, “Wow. That was cool. He really should get with an author and write a book about all this stuff.” With those caveats, I still recommend Not Only Women Bleed to anyone interested in Wagner’s work, life, and/or storytelling.