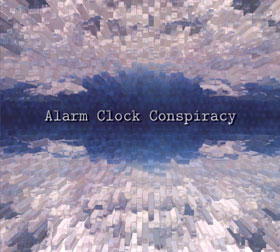 A few years back, a good friend of mine phoned me up and invited me to come out with him to see his friend’s new band. Rarely one to pass up an opportunity for music and beer, I immediately accepted. The band was playing what I understood to be their fist gig – at a popular watering hole in the little town of Black Mountain NC – but all the players were veterans of other bands. My friend’s friend – the lead guitarist – was Ian Reardon, well known in the region for his previous band, the prog-leaning outfit MarsupiaL (sic). But this new act’s name – to me at least – suggested music of a very different sort.

With a name like Alarm Clock Conspiracy, I imagined a cross between (of course) The Strawberry Alarm Clock and The Peanut Butter Conspiracy, two popular food-groups (like The Banana Splits and Bread) from the era when one could get away with naming a band in that fashion. But unlike those psychedelic (or pop-sike, if you prefer) bands, this Alarm Clock Conspiracy wasn’t purveying that sort of material at all.

With guitar textures that often call to mind Russian Circles, Alarm Clock Conspiracy crafts songs that straddle the space between progressive rock and powerpop, with a bit of southern flavor carefully blended into the mix. Instrumentally, “Gone” sounds a bit like early-to-mid-period Rush, but with the guys from Pure Prairie League on vocal harmonies. Some tricky lead guitar brings up the rear as the song roars to a stops-on-a-dime close.

Shimmering acoustic guitar forms the basis of the moody “Tomorrow’s Past,” a minor-key tune that calls to mind Nirvana at their most melodic (think: MTV Unplugged). Steel guitar and mandolin put the focus on the Clock’s Appalachian roots. The laid-back vibe of “What You’re Waiting For” put the emphasis on the group’s vocal harmonies, but there’s plenty of expressive bass lines and lovely, subtle guitar work. And “Walking Up a Hill” redolent of Workingman’s Dead-era Grateful Dead with (much, much) better singers.

All of which makes the musical left-turn of “When You Wake Up” all that much more of a shock. With its Music Explosion-on-ska approach, it points how just how much the guys in the band have absorbed and synthesized their influences. In lesser hands, the song would come off as a novelty; here it works, and well. The band’s melodic southern side – Outlaws style – comes to the fore again on the mid-tempo rocker “Shadow of the Man.”

Splashes of Crazy Horse-style crunch are deftly applied in “Listen,” but in between those barre-chording sections, it’s a bouncy pop tune with breezy, close harmonies. And then it explodes with a searing guitar solo. All in all, it’s a number with enough good musical ideas for three songs. “Walking Alone” is the closest Alarm Clock Conspiracy gets to straight-ahead traditional country, yet it’s among the strongest and most appealing songs on this (rock band’s) album.

The rock returns for “Hello You Young Shadows,” and some spooky, sound-effects-laden sections move it back toward the more complicated and demanding style of Reardon’s old band MarsupiaL. With its backward guitar solos and thunderous drumming, it’s the one place on their self-titled long player where Alarm Clock Conspiracy sounds like their name suggests.

“Talking” is a brief punkabilly romp with a dizzying lead guitar solo and a prog-meets Vegas ending. The jangling “Something’s About to Break” mines the softer side of 70s FM radio rock for its inspiration; its soaring, echo-laden guitar solo evokes the best of that era in a modern way.

Alarm Clock Conspiracy will see official release on June 8, the night of a Release Party and show at Asheville’s Highland Brewing Company. The CD will be available at cdbaby.com and through the band’s own site at www.alarmclockconspiracy.com.