The Solo Raid of Mark Lindsay, Part One 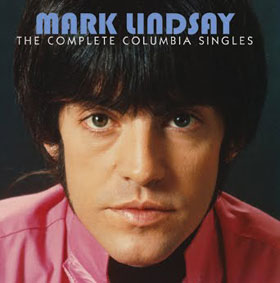 In 2012 Real Gone Music released The Complete Columbia Singles, a 24-track collection of all the a- and b-sides of Mark Lindsay’s solo records. Spanning the recording era 1969 to the early-mid 1970s, many of these are non-album tracks that show a side of the singer not often heard on his singles and albums with his group, Paul Revere and the Raiders.

Mark Lindsay joined Idaho-based band The Downbeats in 1958; by 1960 the band had shrewdly changed its name to capitalize on the first and middle name of its bandleader/keyboardist; they became Paul Revere and the Raiders. On lead vocals and saxophone, Lindsay quickly became the front man and focal point for what was then and always a very visual band; with their Revolutionary War-inspired costuming and tightly choreographed dance moves, the Raiders left an indelible impression.

The music was strong enough not to be overshadowed by the visual appeal, even on television: the Raiders became embedded – along with the Monkees and Beatles – as the face of rock’n’roll for a generation of TV viewers, owing in large part to their ubiquity. Dick Clark‘s daily Where the Action Is exposed the band’s visual style and music to teens and pre-teens, and Lindsay’s heartthrob status was established forever.

Early on, it became clear that Lindsay’s creative impulses demanded more than simply standing out front, singing, dancing, taking sax solos and receiving copious amounts of female adulation. By 1966, with a number of hits in the band’s catalog, Lindsay – working closely with producer Terry Melcher – began to assert greater control over the creative direction of the group. Revere (the nominal bandleader) was a boogie-woogie piano player and rarely sang. “Paul and I were partners in the Raiders,” Mark recalls. “At a very early time, he kind of let me handle the music, and I let him handle the business.”

Whether via his own originals (often co-written with Melcher) or songs he selected, the musical vision of the Raiders soon came to reflect Lindsay’s tastes. While earlier albums consisted mostly of covers, on Midnight Ride, all but two of the tracks were Raiders originals, and more than half of those included a Lindsay credit.

But even with that level of creative latitude, Mark Lindsay’s creative ambitions weren’t fully exercised. Once the most celebrated core group of players (Phil Volk on bass, Drake Levin on guitar, Mike Smith on drums) departed in March 1967, the band became even more a Lindsay vehicle. Late that year Lindsay and Melcher crafted one of the odder artifacts of the era, A Christmas Past…and Present. To put it mildly, it was not a typical holiday-themed record. His next project took him even farther afield, but in some ways unknowingly tipped his hand toward the future: the Raiders-in-name-only release Goin’ to Memphis was in many ways a Mark Lindsay solo project, a collection of covers with Lindsay backed by Chips Moman‘s studio cats. “Even though I was the only Raider in Memphis,” Lindsay says, “it was cut under the auspices of Paul Revere and the Raiders. So I don’t think anybody involved ever thought of it as a Mark Lindsay solo album.” In any event, whether he planned it or even knew it it at the time, by 1968 Mark Lindsay’s solo career had begun.

“I wish I had had enough foresight to see that everything follows a bell-shaped curve,” says Mark Lindsay. “That’s true no matter who you are, where you are or what you are. At the time I thought Where the Action Is would go on forever; I thought the Raiders would go on forever.” But he points to the efforts and influence of Columbia Records A&R head Jack Gold as the impetus for his official solo career. “He came by one day when we were cutting “Let Me” [Billboard #20 in 1969] and heard me while we setting recording levels. The engineer had said, ‘Sing something hard,’ so I sang the song’s chorus. Then he said, “Sing something soft.’ So I did a verse or two of Johnny Mathis‘ ‘Chances Are.’ The net day, Jack called me into his office: ‘Lindsay! I didn’t know you could sing like Mathis!’ I said, ‘I can’t.’ He said, ‘I want you to cut a whole album of ballads.’ At the time, Andy Williams and Johnny Mathis were doing covers of all the lush hits of the day. But I said, ‘No, if I’m going to do an album, I don’t want to do covers; I want to do originals.’ So [producer] Jerry Fuller started looking for material.”

Lindsay’s first two solo records — Arizona and Silverbird – came out on Columbia in 1970. Both showed that softer, more contemplative side of Lindsay’s persona. The arrangements on the solo sides are very tasteful, and they have worn well. “My tastes in music had always been eclectic,” Mark says. “When I was a kid, I grew up listening to Spike Jones and my grandmother’s classical collection, plus everything that was on the radio. And of course in the 50s, they were still playing music from the 40s. I had liked ‘Slow Boat to China’ and Cab Calloway and everybody. I always admired the guys and gals who could really sing. And those tunes had such depth, such lasting qualities.”

While certainly sounding “of their time,” the arrangements on Arizona and Silverbird are lush and emotion-packed. And despite the advent of multi-track capabilities (used to often thrilling effect by Lindsay himself on albums like the Raiders’ 1968 release Something Happening), for his solo records Lindsay cut a lot of the tracks live with the musicians. “Jerry Fuller wanted me to do it that way,” he says. “Playing with the musicians live, there’s a kind of ‘breathing’ that goes on. Even though I was in a booth and couldn’t see everybody – Jerry or Al Capp was conducting – the whole orchestra would rise and fall together, and the voice helped that. [On those recordings] they’re following me, and I’m following them. [If we had cut separately] the interpretation might have been entirely different. If you’re going to have strings and horns and cut the way Frank Sinatra or Doris Day or Ella Fitzgerald did, I think that’s the way to go.”