Album Review: Humble Pie – On to Victory / Go For the Throat 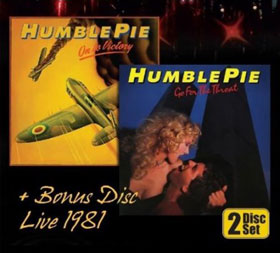 The title of Humble Pie‘s first single – 1969’s “Natural Born Boogie” quickly telegraphed the group’s musical mission: straight-ahead, riffy rock of the sort that would fill arenas with fist-pumping fans. Never the most subtle of bands, Humble Pie was built around the guitars, vocals and personality of ex-Small Faces frontman Steve Marriott. (Peter Frampton was an early member of Humble Pie as well, leaving for a solo career in 1972.) Kindred spirits with fellow boogie bands Status Quo, Bad Company and Foghat, Humble Pie was not primarily a band that delivered musical nuance or deep lyrics. But for a rocking good time, they could be counted on to deliver the goods.

After the commercial high water mark of 1971’s Performance/Rockin’ the Fillmore, subsequent releases yielded diminishing returns, and by 1975 the band had broken up. Marriott maintained the highest profile in the ensuing years, fronting an all-star group and briefly rejoining a resuscitated Small Faces lineup. But by 1980, Marriott had revived the Humble Pie brand name. The new lineup saw drummer Jerry Shirley return; the group was rounded out by Anthony Jones on bass, plus second guitarist Bobby Tench (formerly of the Jeff Beck Group, and most notable for his vocals on “Goin’ Down”). This lineup would yield a pair of albums – 1980’s On to Victory and 1981’s Go for the Throat – and a tour before Humble Pie broke up for good.

A new 2CD set from Deadline Music pairs those two studio albums on one disc, and adds a live concert recording from the 1981 tour for the second disc. The sort of meat-n-potatoes hard rock in which Humble Pie had traded was largely out of fashion by 1980, but that didn’t stop the foursome from cranking it out within the grooves of On to Victory. “Fool for a Pretty Face” was, according to the liner notes, released as a single, but it underperformed. Uncredited sax solos (“Infatuation”), horn charts and rough-and-ready backing vocal choruses add some texture to the songs – as do Marriott’s occasional organ fills – but the approach grows a bit repetitive across ten songs. The On to Victory sound is very much that of an opening band: solid but less-than-inspired riffs wedded to hard rock melodies. Marriott’s lead work is tasty on “Take it From Here” and other numbers, but the relatively slight compositions don’t leave a lasting impression.

“Savin’ It” does represent a bit of a departure: an ever-so-slightly funky reggae-flavored arrangement – aided in that goal by a Tench lead vocal turn – but in the end, most of the track’s distinctive qualities come from the backing vocals and sax, neither of which are part of the core Humble Pie aesthetic. Tellingly, the album’s strongest track is a cover of the Holland/Dozier/Holland nugget “Baby Don’t You Do It.” Here the Pie’s best side is shown; it’s a safe bet that this would have been among the more rousing numbers onstage during this period. (Or not: the bonus disc, recorded at a May 1981 Los Angeles gig, does not include a live version of the song.) A histrionic gospel-tinged reading of Otis Redding‘s “My Lover’s Prayer” does add some variety, but here Marriott’s vocal mannerisms tend toward over-the-top-ness.

Some dual lead guitar riffage brightens “Further Down the Road,” on which Humble Pie sound a bit like Robin Trower. But beyond the riff, the song comes up a bit short in terms of musical ideas. Some nice wailing blues harp is a plus, though. On to Victory closes with a tasty electric-piano-led cover of Allen Toussaint‘s “Over You,” highlighting the fact that – once again – Humble Pie circa 1980 are at their best interpreting the work of others, not writing their own material.

Apparently they realized this: for the following year’s Go For the Throat, Humble Pie opened the record with a rock’n’roll classic, “All Shook Up.” Shamelessly stealing a signature riff from master thieves Led Zeppelin, this reading sounds not at all like the original. A tasty boogie piano-and-lead-guitar break moves the song back into recognizable territory. “Teenage Anxiety” is another thing altogether: featuring voice and solo piano reminiscent of Bad Company’s more contemplative moments, it’s a stronger original than anything on the previous disc.

But then the band seems to run out of ideas: a well-played cover of “Tin Soldier” from Marriott’s old band the Small Faces seems to admit to listeners – a mere three songs in – “we got nuthin’.” The best thing about “Keep It on the Island” is some searing guitar work, but it doesn’t appear – and then only as some fills – until the song’s final minute or so. “Driver” rips off ZZ Top, and that’s rarely a good idea. A by-the-numbers boogie, “Restless Blood” sounds like a cross between AC/DC and Bad Company.

Some Leslie’d guitar anchors Go For the Throat‘s title track, but – ominously – another Led Zeppelin riff crops up. On the album closer “Chip Away (The Stone),” Humble Pie decides to sound like Mountain. Or Cactus. Or West, Bruce & Laing (but without Jack Bruce‘s redeeming vocal work). You get the idea. Some compelling organ work from Marriott is, sadly, a case of too little too late.

The 1981 live set as presented on the second disc offers up a mere three songs from the pair of 80s albums. The emcees’ intro and the crowd reaction do show that onstage Humble Pie were well-received. The band opens with a ten-minute version of “I Don’t Need No Doctor,” originally a highlight of Performance/Rockin’ the Fillmore. In 1981, cowbell-rock wasn’t yet recognized as the cliché it would eventually be; here, the crowd eats it up. The band is on fire, and plays with more intensity than evidenced anywhere on the pair of studio albums of the era.

On to Victory‘s “Infatuation” is at least twice as good live as in its studio guise. Shorn of the auxiliary instrumentation, it’s now a stripped-down good-time boogie. The group’s huge hit “30 Days in the Hole” comes off equally well, and highlights some effective twin lead guitar dialogue. That double guitar approach renders the live run-through of “Tin Soldier” a bit more fiery, and (again) more effective than the Pie’s studio cover. Unsurprisingly, “Fool for a Pretty Face” is better onstage as well.

To the modern-day listener, six-plus minutes of “Route 66” (featuring at least one out-of-tune guitar) is about five minutes too much, but the 1981 crowd reacts well to the hyperactive boogie reading of the classic. “Be Bop-A-Lula” keeps things going in the same key (and arrangement). Again, it probably made sense onstage. On a live disc, it’s more prone to elicit a shrug and a touch to the fast-forward button. Eric Clapton had had a hit on 1978 with Danny Flowers‘ “Tulsa Time,” so in May 1981 Humble Pie thought it would be good to close their show with a cover of it. Well, okay, if you say so. The crowd does get involved. Despite some questionable (if only in retrospect) song choices, the show is well-recorded and performed with gusto. The live set is superior in every possible way to the studio albums On to Victory and Go For the Throat.

The new set features a four-page liner note essay by Dave Thompson; meaning to or not, it places these later-period Humble Pie releases in a context that portrays them as relatively unimportant. Spanning four pages, the potted history of Humble Pie doesn’t even mention On to Victory and Go For the Throat until the final page, and then has little to say about them. The first disc collects the final pair of Humble Pie studio outings, neither of which rank among the group’s finest work. But as a sort of bookend of Humble Pie’s live onstage power, the bonus disc nicely complements the decade-earlier recording Performance/Rockin’ the Fillmore.