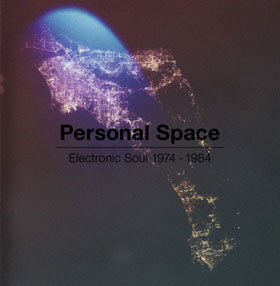 Here’s an interesting thought experiment: What might happen if you gathered a bunch of musicians steeped in 70s soul, funk and r&b, took away their guitars and basses, gave them synthesizers of the mid 70s-to-mid 80s variety, and sent them away to make music? The results might sound a bit like the music collected on Personal Space: Electronic Soul 1974-1984. Across seventeen tracks by nearly as many different artists – few if any of whom, by the way, you’re likely to have heard of previously – this new collection on the Chocolate Industries label (an imprint of the Numero Group) serves up compelling if occasionally goofy and dated music.

These pieces are the working definition of the DIY aesthetic. Many were recorded by solo artists, working with a whole class of recording equipment that had only recently come within the financial grasp of the home musician. No $40,000 Mellotrons here: recorded on four-track cassette machines using primitive sequencers and relativer inexpensive keyboards, these songs have a homegrown ambience. Guitar Red‘s “Disco From a Space Show” owes a bit to Meco‘s “Star Wars Theme,” but some of the (several) keyboards on the track sound like the kind of organ one might have found in many a 70s living room.

It’s unknown whether modern-day acts such as Daft Punk have ever heard tracks like Jeff Phelps‘ “Super Lady” (one of Personal Space‘s most commercial-sounding tracks), but there’s a sonic similarity between the French duo and these homespun efforts from decades earlier. “Super Lady” sounds a bit like Robert Palmer‘s “Clues” filtered through a funk sensibility.

The term “lo-fi dance stomper” isn’t a label that’s in popular use, but it’s a fair description of Jerry (J.G.) Green‘s “I Finally Found the Love I Need.” The synthesizer bass on the track is of the sort that pops speakers out of their car dashboard mountings. A jazz-blues-funk track called “A Man” by Key & Cleary has nearly all of the ingredients of a hit, but the cheap recording vibe and use of drum machines(!) takes it in an a direction that – while certainly much less commercial – remains oddly appealing.

It sounds as if the people in Spontaneous Overthrow went by their friendly neighborhood pawnbroker and scored a Farfisa Compact Duo; the Italian organ (made famous on early Pink Floyd sides) is the central instrument in the spacy 1984 drone of “All About Money.” Makers’ “Don’t Challenge Me” features ghostly disco-diva vocals atop a strange, bleating electronic beat: imagine a cross between Herbie Hancock‘s 80s work and Paul McCartney‘s McCartney II.

Not all of the album is synth-based. T. Dyson and Company‘s “It’s All Over” features funk-poppin’ bass lines – real ones – and expert electric piano. But even here, some synthesizers – they sound like early (pre-digital) Rolands to these ears – add a vaguely (and probably unintended) new wave feel. Quite a few of the tracks on Personal Space are repetitive one- or two-chord jams, but there’s always something interesting with them to set them apart from garden-variety funk. “Are you Ready to Come? (With Me) Pt. 2” by USAries features a bed of musical dialogue between an acoustic guitar and some sort of electronic keyboard.

Things wrap up with a pair of truly weird cuts. “My Bleeding Wound” by The New Year (published by the provocatively-named Sexual Harassment Music) featured echo-chamber shouted vocals atop a four-note riff that doesn’t fit into the beat. Some suggestively heavy breathing figures prominently into the mix as well; this one must be heard (once) to be believed. A religiously-themed track by Otis G. Johnson called “Time to Go Home” closes Personal Space. It features little more than an often off-key Johnson plus some spare and hamfisted piano, the most rudimentary of beat boxes, the most basic of melodies, and some Jesus-is-coming lyrics. But it too must be heard, if only for the yeah-somebody-recorded-this experience. No word on what’s up with the small child’s vocals that fade in and out of the mix.

For a taste of some underground sounds you probably didn’t know existed, Personal Space: Electronic Soul 1974-1984 is in a class by itself.