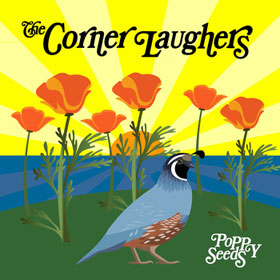 With the impossibly winsome vocals of Karla Kane out front, The Corner Laughers‘ pop style is a tasty recipe indeed. Their 2012 release Poppy Seeds continues in their grand tradition. While the opening voice-and-ukulele of “Grasshopper Clock” suggests – if for a moment – a lighter-than-air confection, the clever melody unfolds gradually, revealing a quality that the British call an earwig. One listen and I defy you to get the melody out of your head. Thing is, if you are (as am I) a fan of intelligent pop, you won’t want to forget the melody; its place in your skull will be a welcome one.

Khoi Huynh is a melodic bassist in the McCartney mold; his lines rarely restrict themselves to holding down the root note. Instead he often crafts a subtle countermelody that complements the lead vocal line. Like most all of the Corner Laughers’ music, “Grasshopper Clock” is unapologetically upbeat. But there’s not a thing wrong with that.

Huynh’s propulsive bass line kick starts “Bells of El Camino,” and Kane’s insistent and plucky ukulele strums push it in the same direction. Charlie Crabtree often employs a light touch on the drums – you don’t want to overpower a ukulele, after all – but he instinctively knows when to throw in a press roll or hard-hitting fill; the result is more finely textured and expressive percussion work than one usually finds on a pop record.

The swaying “Laughing Stars” weds the 60s jangle of The Byrds with a sunny Brill Building sensibility, and some interesting sound effects give it a modern feel. On the chirping, bouncy “Twice the Luck,” Kane’s not afraid to trill, “doot-doodly-doo” and “ba ba ba.” The tune’s minimalist arrangement suits the vocals perfectly. On “Transamerica Pyramid” the Corner Laughers sound closest to their alter ego, The Agony Aunts. The track’s lovely vocal chorus recalls The Beach Boys at their summery best.

On the speedy “(Now That I Have You I’m) Bored,” the band conjure a sound halfway between their normal approach and that of Shonen Knife. KC Bowman‘s guitar is thick with distortion, yet the strong pop feel of the band’s work shines through. “8:18” heads in a spaghetti-western direction, and the arrangement recalls Spanky and Our Gang.

“Chicken Bingo” is perhaps the most ambitious track on Poppy Seeds, bringing together more good musical ideas than have a right to be in a single tune. Its virtues are too numerous to catalog, but here are a few: the inspired vocal harmonies, Crabtree’s exciting drum fills, the guitar solo. There are many more pleasures within its three-and-a-half minutes.

The album’s brief instrumental title track sounds like a child’s tiny little music box in the hands of Brian Eno. The album wraps with the sparkling, Jackie DeShannon-flavored “The Perfect Weather,” an ode (in part) to San Francisco. The song earns bonus points for its appealing — and non-clichéd — use of accordion. In Corner Laughers land, the weather’s always perfect, the flowers are always in bloom, everyone’s always in love, and all is right with the world.

Poppy Seeds wouldn’t be a Mystery Lawn release if it didn’t feature support from assorted friends of great import, and on this outing The Corner Laughers are joined by Allen Clapp (of, well, nearly everything on Mystery Lawn), Mike Viola, marvelous fella William Cleere, Anton Barbeau (watch this space for coverage of his music, coming soon) and a host of other names I expect I’ll learn more about soon enough.