Album Review: The Residents – The Third Reich and Roll 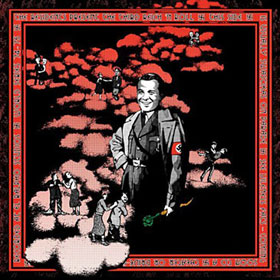 The Residents‘ third recording (though released as their second), The Third Reich and Roll, presents the inscrutable group at their most provocative. The album (or EP, depending on your point of view) artwork is designed to offend, and it’s wildly successful in its goal. A German SS officer looking very much like Dick Clark smiles benignly from the cover, surrounded by couples who (at first) seem to be dancing. But a closer look reveals one-half of each couple to be the man who Mel Brooks described as having “a funny little moustache, piece of hair falling in his face.”

MVD Audio currently has the rights to the Residents’ back catalogue, and in 2012 released the album, following up earlier reissues of Meet the Residents and Not Available. Contemporary descriptions of The Third Reich and Roll would have you believe that the record is a typically Resident-ial treatise on pop music’s fascistic tendencies, and its goal of giving the listener a tiny but of predigested rebellion to keep them from actually, y’know, rebelling. Setting aside all that deep insight, there remains the music.

In its own way, said music is as provocative as the artwork. Technically comprised of but two long tracks (“Swastikas on Parade” and “Hitler Was a Vegetarian”), in reality the album is a long string of snippets of popular songs, each run through the Residents’ musical grinder. The result is predictably bizarre. Chubby Checker‘s “Let’s Twist Again” is re-imagined as a bierhalle putsch singalong, and the transitions between pieces owe a lot to Frank Zappa‘s montage editing style used so effectively on We’re Only in it For the Money. Cannibal and the Headhunters‘ “Land of a Thousand Dances” is transmogrified into something altogether more menacing.

And that’s only the first two minutes. You’ll thrill (or shudder) to insanely inverted/re-imagined renderings of Tommy James and the Shondells‘ “Hanky Panky,” a spooky choral reworking of The Turtles‘ “Happy Together,” and other beloved favorites. While decades later The Residents would produce relatively accessible works such as 2006’s The River of Crime, in the mid 1970s they were having none of the mainstream.

As with most Residents releases, it’s not always clear what sort of instruments are making the sounds; everything is so treated and twisted that it’s nearly impossible to know. But the juxtaposition of strafing warplanes’ machine-gun fire and a “cover” of The Swinging Medallions‘ “Double Shot (of My Baby’s Love”) makes some sort of crazy sense in The Residents’ world. Near the end of the whole thing, a relatively straight (by Residents standards) take on the coda to The Beatles‘ “Hey Jude” (with some Stones-y “woo-woos” thrown in for effect) wraps the album up in inimitable style. The emphasis throughout The Third Reich and Roll is on Top 40 tunes from the 1960s; to this reviewer’s knowledge, no one has ever presented a full catalogue of material covered on the record, but Residents fans have gamely attempted to do so: their best guess can be found on the album’s Wikipedia page.

Aficionados of the strange: if you haven’t heard this, correct that oversight. Others – including those who are offended by desecration of hits they love – best stay away.

Note: Perhaps music’s first mash-up, The Residents’ inspired and apocalyptic cut-up-and-reassembly of Beatles tracks titled “Beyond the Valley of a Day in the Life” was included as a bonus track on some earlier reissues of The Third Reich and Roll. It’s not, however, included on the 2012 MVD Audio pressing.