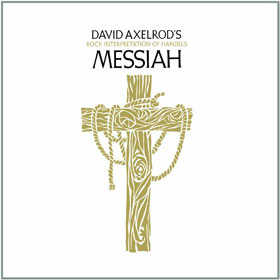 Among rock fans who followed the liner-notes-and-back-stories side of sixties rock, the name David Axelrod can evoke some visceral reactions. On one hand, he’s the guy who produced Cannonball Adderley‘s smash hit, “Mercy, Mercy, Mercy.” But rock fans know him better as the man who gave the world the ersatz Electric Prunes album Mass in F Minor. The songs on that and the followup Prunes LP (Release of a Oath) had somewhere between nothing and nearly-nothing to do with the actual Electric Prunes, a point which vexes that group to this very day. For most fans of garage-psych classics like “I Had Too Much to Dream Last Night,” rock-ist readings of church music and the Kol Nidre were – to put it mildly – pretentious twaddle.

But Axelrod’s interest in such combination of forms was sincere, and those Electric Prunes projects pointed the way toward his future work. In 1971 he released an album that bore the lengthy title David Axelrod’s Rock Interpretation of Handel’s Messiah. Enlisting many of the same studio cats he had used on earlier works (including the estimable bassist Carol Kaye) Axelrod attempted an update of the 1741 oratorio. Using uncredited vocalists singing in English, Axelrod applied rock(ish) arrangements alongside orchestral instrumentation. The results are relatively satisfying, if occasionally jarring. Feedback guitar and a vaguely country-and-western lilt adorn “And the Glory of the Lord.” A choral vocal arrangement adds a gospel feel, while Cannonball Adderley’s orchestration is reminiscent – extremely and perversely so, in fact – of the style Frank Zappa would use a few years down the road on what would eventually come to be known as Läther. By necessity, the solo vocal parts are a bit mannered; the chorus sections have a looser, more organic feel.

The uncredited female lead spotlighted on tracks like “Behold” is backed by a Stax-meets-the-church arrangement that reinforces the gospel/soul-flavored texture of her voice. Unfortunately, the music itself on that track fails to go anywhere interesting. “Pastoral Symphony,” on the other hand, is a lovely classical instrumental piece, but there’s noting remotely “rock” about it: only classical instruments are used – no wah-wah guitar or drum kit here – and the result is the sort of light-classical stuff anathema to the typical rock’n’roll fan.

“And the Angel Said Unto Them” is midtempo god-rock that will appeal to fans of Godspell and Jesus Christ Superstar, but probably not to people who dig Quadrophenia or the soundtrack of The Rocky Horror Picture Show. Heralding trumpets sit uncomfortably alongside fuzz guitar, and a shrieking soprano wails about angels. “Glory to God” is far more effective, combining the feel of A.M.E. Church choirs, classical instrumentation and rock(ish) filigree. Halfway in, some tasty, understated pedal steel makes an appearance.

“Hallelujah” is the number that will be the most familiar to most listeners (though likely not this version). A nice flute solo and standard rock backing – albeit with an electric guitar solo mixed so low as to be nearly imperceptible – add dimension to what would otherwise be a nice enough church hymn.

Axelrod’s Messiah is not, in the end, the Great Lost God-rock Album; not the missing link between classical and rock; not anything else of the sort. But as an experiment from the days where record companies would bankroll nearly anything, it’s an interesting curio, one well worth a listen for open-minded listeners.