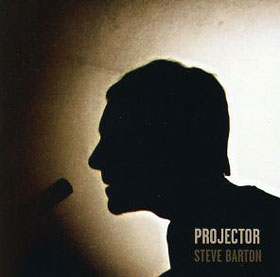 I’m a longtime fan of San Francisco-based rockers Translator. While their highest profile hit was 1982’s “Everywhere That I’m Not,” for me their finest hour was their last release, 1986’s Evening of the Harvest. With guitar dueling that reminded one a bit of a more mainstream Television, and some amazing songwriting, that effort was unjustly ignored by the marketplace. (Most critics slagged it, too. Go figure.)

Steve Barton was one of the two guitarists and songwriters in Translator, and as it turns out (new to me, anyway), he’s long had a solo career, having released five albums since 1999. His latest is Projector, and it’s a true solo effort. The dozen songs were all cut directly to two-inch tape with minimal (and sometimes no) overdubbing. There’s a spare, sometimes spooky and intimate vibe to these largely-unadorned songs. It’s not wide of the mark to call Projector something of a Steve Barton / Plastic Ono Band: the songs are emotionally direct, and the occasionally (and very intentionally) lo-fi production aesthetic renders them even rawer, more naked.

The hooky nature of Barton’s songwriting is sometimes dialed back, but it’s just as likely to shine through. “These 4 Walls” is one of those lower-fi tracks, but there’s a nice hook built into the song. The spare acoustic “Here Come I” recalls White Album John Lennon. “Projector” sounds and feels like a demo, but all of the arena-rock potential the track could have is expertly implied. In a way, it’s more effective as is.

“Bowie Girl” could be a parody along the lines of Flight of the Conchords‘ “Bowie,” but instead this NSFW song effectively captures the banging-the-hell-out-of-the acoustic vibe the Thin White Duke used in the early 70s. The shimmering “This is Where Tomorrow Ends” captures the feel of the quieter moments on Evening of the Harvest. “Mojave Phone Booth” has a snaky, bare-bones quality that calls to mind country bluesmen of the mid 20th century crossed with Tom Verlaine‘s approach to his own solo work. Its in-your-face guitar solo comes as a welcome surprise; its effect is pleasantly unsettling.

The clattering “Pie in the Face” was recorded on a four-track cassette, and is easily the lowest of the lo-fi. But its grinning, ramshackle lyric takes a Phil Ochs point of view and applies it to the Occupy movement’s POV. “Please” is (or would be) every bit as commercial a song as “Everywhere That I’m Not.” The heart-rending and direct “Super Fantastic Guy” is a lovely, moving elegy to…someone. The album ends with Barton accompanied only by his electric guitar, with squalls of feedback making it a sort of plugged-in campfire tune.

In their simple guise, the songs on Projector are likely not destined for hit single status; in more developed arrangements, they possibly could be, but that wouldn’t be in line with the overall aesthetic goals of Projector. But for anyone who can appreciate the direct, unalloyed work of artists like Neil Young and Bob Dylan, Projector is a worthy offering in that style.