Home  »  interview   »   Treasures From the Vaults: The Jazzhaus Series, Part One

Treasures From the Vaults: The Jazzhaus Series, Part One 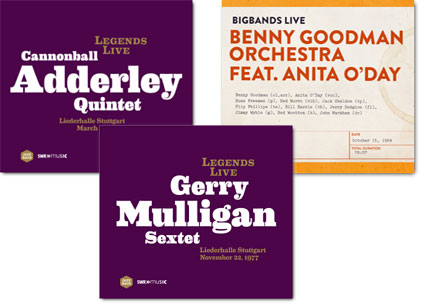 Very recently, I spoke with Ulli Pfau, curator of a new series of archival jazz recordings on the German SWR Music label. These releases – under the Jazzhaus imprint – bring previously-unreleased live-in-the-studio (or concert hall) performances from a long list of jazz legends. The initial release schedule in March 2012 included three titles: a Benny Goodman Orchestra set from 1959 featuring Anita O’Day; the Cannonball Adderley Quintet from 1969 with Joe Zawinul; and the Gerry Mulligan Sextet recorded in 1977.

We quickly established some commonality: both of us had come up as rock fans first – specifically as Beatles fans — and both credited our introduction into jazz via the music of Julian “Cannonball” Adderley. Moreover, for both of us, a few Adderley tracks were for many years our only real jazz interests; it would only be many years later that each of us would delve deeper into the genre.

Pfau recounts how he got involved in this historically monumental project: “I’m a film and television producer. I started out my career in the late 70s at the broadcast station SWR; it used to be two stations: SDR and SWF, and they merged. I was a documentary filmmaker and producer. And all of a sudden I was heading a music department at the station, so I produced jazz concerts for television between 1985 and 1998 or so.” Near the end of the decade, Pfau left to pursue other opportunities.

“But,” he continues, “two years ago they called me from the station. The marketing department wanted to release the early jazz stuff that they had in their audio archive. Because they know I was working in the music field when I was at the station – and because I know my way around – they wanted to know if I would like to be a kind of creative director or artistic director to research the music and make all the compilations for new releases.” His charge would be, in part, to “listen for what sounds fresh and would be fit for release.” He readily accepted the challenge.

“It was like Christmas and Easter together for me,” Pfau beams. “It’s mostly unknown music, lost and forgotten tapes. I go into the archives and take out the actual tape reels. Most of this music is not available on CD, and has never been digitized.” The first three Jazzhaus releases span a wide range of styles and time periods. But these merely scratch the surface, Pfau says. “In Germany, we released five CDs. We couldn’t clear – so far – a Duke Ellington concert, and we are working on clearance of an Art Blakey concert.”

Indeed, licensing can be a challenge. “We have,” says Pfau, “a lovely Ray Charles concert which we are right now not able to license. They [Concord Music Group] don’t even talk to us.” But he’s optimistic in general. “I think, if the reputation of the label will grow, it will be easier for us to license the music.” Pfau says that SWR has some expert negotiators working for them to – he hopes – clear the way for some of the more challenging licensing issues. “The ‘big fish’ are very complicated,” he notes. “They’re asking for a lot of money.”

Asked about the rationale for choosing the release order of concerts, Pfau sighs. “There’s so [much] music, you have to start somewhere.” Though he’s justifiably proud of the first three, he teases just a bit: “I didn’t want to come out with the real treasures first. The Adderley concert is one of those, but there’s also a lot of Miles [Davis]. There’s a lot of Dizzy [Gillespie], modern jazz. You can’t imagine how much it is. I figure it’s about 3000-3500 hours in the archive. It’s really big.”

“And,” Pfau continues, “the quality is really good. Eighty-five to ninety percent of it is live performance in concert halls. The sound engineers were people who were used to recording classical music. So they had a big expertise in doing well-recorded live [shows].” We both remark on the contrast between that situation and the one faced by rock performers on TV and radio in the US in the sixties; in those cases, they often worked with audio engineers who had little experience with (much less appreciation for) the subtleties of high-volume rock’n’roll. As a result, what few TV and radio archives that exist within the rock idiom are generally of middling-at-best fidelity.

Returning to our discussion of the material in the SWR archives, Pfau stresses that “the technical quality is astounding.” He describes the circumstances that led to so many performances being recorded. “Imagine [the period] after World War Two,” he says. “There was nothing left from the 1920s and early ’30s in Germany. There was a big cultural emptiness in Europe after such a devastating war. It was a re-start with everything. The American music was welcomed in a way you cannot even imagine. The musicians,” he notes, “hadn’t been treated that well in the U.S. – the black ones – and here, they were treated like heroes. They brought along liberty. Along with the American forces who liberated Europe, they brought a new music, a new art. And they were really treated like stars. They were accepted as personalities, as musicians, as artists. People like Lester Young, or Thelonious Monk, or Oscar Pettiford, or Kenny Clarke…being treated so well, the music went well. Jazz is mostly an improvised music, so in a way they wanted to thank the audience for being so kind to them. And you hear that, I think, in the music.”

The venues made a difference as well. “They didn’t play clubs as they did in the U.S. – with some exceptions, of course,” Pfau observes. “Here, they played concert halls. In Freiburg Stadthalle, fifteen hundred people. In Stuttgart Liederhalle, two thousand five hundred seats. So they played really big halls, and it was for them a real experience. And I think that’s why the music sounds so good.”

The audience in Germany was huge for these jazz broadcasts. “They had a lot of slots on the radio,” Pfau says. “Every week there were four or five slots for playing new records, and recording [touring artists] who were going through Europe. A lot of these musicians came to Europe because they could make quite good money here. A lot of the concert organizations made a lot of money sending the artists to Europe, so almost all of the music came here.”