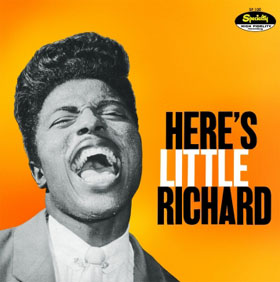 Little Richard (Penniman) is notorious for his high estimation of his influence on popular music. Among those who’ve studied the history of rock’n’roll, his attitude is amusing, but rightfully acknowledged as not all that wide of the mark. As a friend and bandmate of mine recently pointed out, he’s the father of glam rock.

Well, yeah. Among other things. Rolling Stone magazine – which, once upon a time, was a reliable arbiter about such matters – rated his first album Here’s Little Richard as #50 on its list of the greatest albums of all time. Today it plays almost like a greatest hits collection, but it’s worth remembering that it was his first full-length record.

Richard did cut a number of sides for RCA and Peacock in the early 1950s, but those didn’t go anywhere. He cut a two-song demo of middling audio quality and (at the suggestion of “Lawdy Miss Clawdy” songwriter Lloyd Price) submitted it to Art Rupe‘s Specialty label.

Say what you will about Rupe; he clearly heard something in that tape that’s not readily evident to most ears. Those two songs, “Baby” and “All Night Long,” are competent enough blues shouters, but they sort of lumber along. The band is badly out of tune and sounds like the session was cut at the end of a long evening. And none of Little Richard’s trademark piano pounding is evident. “Baby” would be recut in a greatly improved fashion for Specialty; “All Night Long” was also recut but remained in the can, ending up on a Specialty odds-and-sods collection The Fabulous Little Richard, released to capitalize on his fame after he left the label (and, for a time, rock’n’roll).

In any event, Rupe signed Penniman and got him into the studio to record the twelve songs that make up Here’s Little Richard, and those tracks pretty much say everything he ever needed to say musically. More than half of the numbers are stone classics: “Tutti Frutti,” “Ready Teddy,” “Slippin’ and Slidin’,” “Long Tall Sally, “Miss Ann,” Rip it Up” and “Jenny Jenny.” The other five are nearly as good.

The performances are tighter than those early demos (also included on this new Concord reissue in 2012) but not too tight; there’s enough reckless abandon to inform everything bands like the Sex Pistols would need to come up with their own interpretation of rock’n’roll a mere two decades later.

The Concord collection appends a radio interview with Art Rupe and a pair of screen test videos of Little Richard (the latter were not included on the reviewer’s advance). An excellent liner notes essay by Lee Hildebrand sets the scene for listening to Here’s Little Richard in the proper historical context.

Typical of the era, the artist didn’t own his recordings, so Richard recut many of the songs from Here’s Little Richard later; nearly all of these are inferior versions. The ones on this collection are the ones you need; no self-respecting rock fan should be without this music.