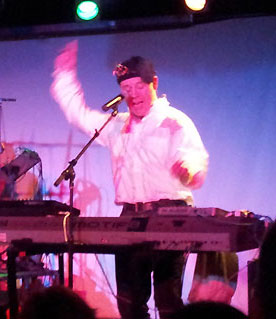 I wasn’t completely sure what to expect from a Thomas Dolby concert. I knew he’d avoid dated 80’s kitschy shtick; when I interviewed him a year ago, he memorably told me, “every week I get an offer to go off and do some eighties revival tour with ABC and A Flock of Seagulls.” With his first album of new studio material in two decades, A Map of the Floating City, Dolby is, so to speak, back on the cultural map.

Of course he never left; he was merely involved in projects other than the traditional make-an-album-and-tour tradition. For some time he’s been the musical director for the popular TED conference. But he’s now touring in support of the new album (first released in a sort of planned-piecemeal form as a trio of EPs), and I journeyed out of the mountains to see him at The Handlebar in Greenville SC.

The Handlebar is billed as a “listening room,” and that’s a fair description: it’s an intimate space with reasonably good acoustics, an excellent sound system, and a stage that’s low enough to eliminate the gulf between performer and audience. I had been to the venue twice before, for concerts by Todd Rundgren and The Church.

Those with a casual knowledge of Dolby’s recorded work might think of his hit singles “She Blinded Me With Science” and “Hyperactive,” and thus expect a live show heavy on electronics. But Dolby describes himself and his music as “organic,” and in fact his live presentation backs that up. Yes, he did play keyboards – a full 88-key Yamaha Motif, a Roland synth and an M-Audio MIDI controller, but the electronics, samples and sequences were seamlessly folded into the performance.

Part of the reason it all hung together so well is down to Dolby’s onstage support: his drummer triggered the bass lines (as opposed to playing “to” them), and longtime Dolby associate Kevin Armstrong provided texture in spades on his Telecaster. Dolby’s music truly does draw from a vast array of genres: you’ll hear zydeco, jazz, blues, country, Appalachian folk, electronica, and – of course — rock. Armstrong nailed the Bakersfield sound on tracks like “Road to Reno” from A Map of the Floating City, and throughout the show, Dolby’s arrangements put the guitar front and center. The result was less “Thomas Dolby and some guys” and more of a real band.

Aaron Jonah Lewis, a multi-instrumentalist with whom Dolby has worked recently joined the trio onstage for several numbers, adding – in turns – (amplified) acoustic guitar, harmonica, fiddle, banjo and vocals. Some in the audience might have been a bit surprised to see and hear those kinds of sounds from the man who gave us Aliens Ate My Buick, but then one of the EPs that forms the new album is in fact called Amerikana.

In addition to the music, a highlight of the show was Dolby’s penchant for introducing some songs with a back story. His anecdote preceding “I Love You Goodbye” was particularly amusing, and helped generate interest for a lovely song unfamiliar to most of those in the audience. And when Dolby finally wheeled out “She Blinded Me With Science” as the last number in the set (prior to encore), his story about working with Dr. Magnus Pyke (the man who declaimed, “Science!”) elicited howls of laughter from the enthusiastic crowd.

The set offered both new and old, but somehow even the thirty-year-old numbers sounded modern on this night. The venue wasn’t packed, but those in attendance received the newer and less familiar material with open ears. That Dolby’s music is warm and inviting (not to mention hook-laden) certainly helps. From “One of Our Submarines is Missing” to the dance-oriented encore of “Spice Train,” Thomas Dolby provided a fantastic evening of entertainment.