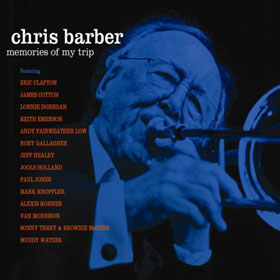 Chris Barber is one of those names I’ve known, but never heard the music; as an enthusiast of the British blues boom, I’d stumble across his name whenever reading about the development of that scene. Though bandleader (and trombonist and saxophonist) Barber isn’t – strictly speaking – a blues musician, he’s worked with many blues artists both British and American. As something of a father of British music scenes, Barber has a stature not unlike John Mayall. It’s no overstatement to say that pop music as we know it would have been very different without Chris Barber.

One example to support that assertion: a singer and banjo in Barber’s employ did well enough that he was able to release singles credited to his own name (Lonnie Donegan) backed by the Chris Barber Jazz & Blues Band. Those singles — “Rock Island Line, “Digging My Potatoes” – gave rise to the skiffle craze, a phenomenon that was in its own way a precursor of the 1970s punk movement: the idea that anyone-can-play inspired a generation of youths including John Lennon, Paul McCartney and George Harrison, to name just three.

A new 2CD collection titled Memories of My Trip brings together recordings of note from throughout Barber’s long career. Foregoing any sort of chronological approach, Memories of My Trip (named after a Brownie McGhee song that recounts his meeting Barber and others) is instead a sort of musical travvelogue through significant chapters and people in Barber’s orbit. The set is programmed more for thematic, storytelling unity. Thus, a 2010 Eric Clapton track that features Barber on trombone (“Weeping Willow”) is followed by a swinging live version of “Kansas City” by Muddy Waters with Barber, Pinetop Perkins and other luminaries. That 1979 recording from the Capital Jazz Festival is of marginally better than bootleg quality, but the performance is such that sonic quality shouldn’t matter.

More than most collections of this type, Memories of My Trip is really an essay (penned by Barber himself) with a pair of CDs to accompany it. While the music holds up well on its own, the context offered by Barber’s recollections help weave the sometimes disparate styles of music together into a unified whole. Though nominally a “trad jazz” artist (a genre better known to American audiences as Ragtime or Dixieland jazz), Barber has always been the sort of artist who seemed to have little use for pigeonholing.

Traveling to America and Europe as he did, Barber worked and recorded with many blues legends (Waters, James Cotton, Sonny Terry & Brownie McGhee and others). But many slightly more modern-day artists jumped at the chance to work with him as well. Memories of My Trip includes fascinating cuts like “Rock Candy,” a 1966 number by the T-Bones, featuring Barber sitting in with organist (and Jimmy McGriff acolyte) Keith Emerson. A previously unreleased 1990 Rory Gallagher track features the guitarist on acoustic slide and vocal, backed only by Barber on upright bass; it’s a spare yet fiery live performance.

In addition to his career as a blues/rock guitarist, The late Jeff Healey also fronted a band called The Jazz Wizards; a live 2006 recording of “Goin’ Up the River” features Healey on trumpet(!) with Barber guesting on trombone and vocal. A few tracks feature Barber working with Van Morrison; Dr. John is on one of these as well, an unreleased track from 1976). Again, Barber’s liner notes provide useful and informative back-stories for each track. Other tracks feature Barber playing with Andy Fairweather-Low, Mark Knopfler, Jools Holland and other highly regarded names. For this listener, the highlight of the entire set is Barber’s bop-flavored “Tea Party Blues,” but there’s plenty here for most tastes.

Memories of My Trip is a delightful survey of Barber’s varied projects, showing him out front and as part of ensembles. For anyone who knows him only as a name in British music history, this 2CD set is an excellent entry point into his work.