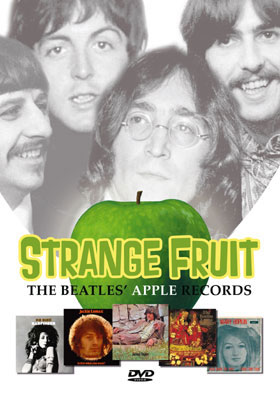 Update 5/2014: Apparently everybody’s happy now, and the video is available on Hulu. — bk

Update 4/2012: I have just learned that Apple Records has intervened to halt distribution of this DVD. Maybe that explains why I have received several — not one, but several — queries from parties connected to some of the artists covered in the documentary. Apparently there are some, shall we say, licensing irregularities. — bk

Right on the heels of From Straight to Bizarre, a documentary that takes an in-depth look at the artist-run record label founded by Frank Zappa, comes Strange Fruit: the Beatles’ Apple Records. Using the same approach (and a nearly identical format: if it works, it works), Strange Fruit traces the start, rise and fall of the Beatles‘ boutique record label.

Drawing on historical records, Beatles scholars and interviews from a few who were there, Strange Fruit starts out by showing when, why and how the Beatles started the label. Equal parts creative endeavor and tax shelter, Apple was to be, in Paul McCartney‘s immortal words, a sort of “Western communism.” The lofty (and, in retrospect, somewhat naïve) ideals espoused for Apple did result in some interesting music. Aside from the Beatles themselves (and their solo work into the mid-1970s) Apple was home to some high-caliber talent.

Though, for any number of reasons (some internal, some external) few Apple releases were commercially successful. While select Apple singles did quite well (“Hey Jude,” Mary Hopkin‘s “Those Were the Days,” Badfinger‘s “Day After Day” and “No Matter What”), plenty of good-to-excellent music flew under the radar, selling little. Surprisingly, Billy Preston‘s excellent pair of Apple LPs (That’s the Way God Planned It and Encouraging Words) hardly sold at all: the first only reached #127 on the Billboard album chart, and the second (even better) album didn’t chart at all.

The reason had much to do with the Beatles’ dissolution: by the very early 1970s their individual attention was on solo careers and lawsuits. Near the end of the sixties, Allen Klein had been brought in to stop the financial hemorrhaging of Apple, and he did so (after a fashion) by gutting the company and stopping many projects then in the works. This meant that in real terms there was no one left at Apple to “service” the albums to radio and whatnot, and in those high-touch days personal contact often made the difference in a song getting airplay.

Beatles mainstay Tony Bramwell reflects upon much of this during his segments in Strange Fruit. Apple artist Jackie Lomax talks about his signing to Apple, and the all-star sessions for his Is This What You Want? LP. The Iveys/Badfinger saga is discussed (from the Apple perspective) by original Iveys guitarist Ron Grifffiths and his replacement (Griffiths was forced out in 1969) Joey Molland.

Now-obscure Apple releases by John Tavener and the Radha Krishna Temple get perfunctory coverage; perhaps that’s down to the facts that (a) hardly anyone’s heard them to this day, (b) none of the principals was available for comment and (c) even the reissued CDs are tough to locate. Slightly more time is spent on Doris Troy‘s album, though the talking head experts in Strange Fruit (most notably Chris Ingham) have little good to say about it. In fact Ingham is largely (and unfairly, says I) dismissive of Badfinger’s music on the whole. James Taylor‘s Apple debut gets a deserved amount of coverage; too bad Taylor himself didn’t weigh in. A lot of time – some might say too much – is spent on the career of Welsh soprano Mary Hopkin; to be fair, though, she sold a lot of Apple product.

The 1970s output of Apple is dispensed with fairly quickly, which also makes sense. The solo Beatles’ work is mentioned only briefly (it’s covered in other documentaries from the same Sexy Intellectual/Chrome Dreams people). Instead Strange Fruit focuses on releases by Elephant’s Memory and Yoko Ono. Mark Paytress makes an enthusiastic case for the value of Yoko Ono’s early 70s work; whether the viewer will be convinced is another matter. David Peel – who is today far less annoying than he was in his The Pope Smokes Dope days – gets a bit of coverage; why Paytress doesn’t weigh in on the marginal-at-best value of his music is a minor mystery.

Taken in total, Strange Fruit is a consistently watchable film that covers its subject from all important angles. It’s essential viewing for anyone with a deep interest in the Beatles or the artists who came into their orbit. A few mild criticisms do warrant mention, however: some of the stock footage used to accompany the music clips will seem oddly familiar to viewers of previous Chrome Dreams productions; in particular, a vintage scene of a couple in a canoe on a lake has popped up in other DVDs. Worse, in Strange Fruit, the vaguely goth-creepy vibe of that visual does not fit with the music paired to it. And then there’s the curious omission of any mention of Zapple Records, the sub-label for really-out-there releases. True, only two albums came out on Zapple (George Harrison‘s Electronic Sounds and John and Yoko’s Unfinished Music #2: Life with the Lions) but a quick mention would have sufficed. Oddly, Zapple did get covered (albeit briefly) in Chrome Dreams’ From Straight to Bizarre documentary.

But those are minor complaints; Strange Fruit: the Beatles’ Apple Records is another in a growing line of consistently thought-provoking music documentaries.