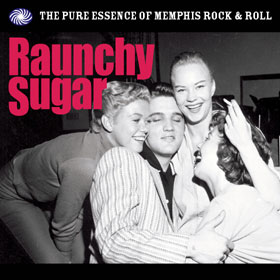 When one thinks of early rock’n’roll coming out of Memphis, it’s likely that the first names springing to mind are Elvis, Jerry Lee, Carl Perkins and Johnny Cash. And for good reason: those four (dubbed the “Million Dollar Quartet” in connection with a one-off, informal December 4, 1956 session that was bootlegged for many years prior to its official – and anticlimactic – release in 2006) were the highest profile artists to find fame beginning in the West Tennessee city on the Mississippi River.

But they weren’t the only ones, and many lesser-known (and lesser) artists created some music that deserved a wider hearing. UK-based label Fantastic Voyage attempts to set things right with a new 3CD set called Raunchy Sugar: The Pure Essence of Memphis Rock & Roll. Focusing less on the country, sol, blues and r&b styles coming out of Memphis – except to the point where those styles inform rock’n’roll – Raunchy Sugar presents artists who recorded for labels other than Sun: Hi, Cover, Vaden Moon, Fernwood and Satelllite (later called Stax, but that’s another story).

Seventy-five tracks from nearly as many artists show that there was a great deal of variety (by 1950s standards) in Memphis music. So while Jimmy Pritchett sounds a whole lot like Jerry Lee Lewis on “That’s the Way I Feel,” the guitar lead heads in a direction Lewis’ bands rarely ventured. While all of the big names are represented on Raunchy Sugar, the selections are outside-the-box: no “Heartbreak Hotel” or “Blue Suede Shoes” here; the compilers seem to wager that interested parties need not add an umpteenth copy of those songs to their collections.

There’s more guitar riffage on Lynn Vernon‘s bluesy uptempo instrumental “Moon Rocket” than one might expect; if the song went nowhere after the blistering intro, it would remain well worth hearing. And in fact the song-proper is fairly ordinary. But the intro nails it. In the hands of Eddie Bond, “I Got a Woman” becomes something slightly different: again, it’s a guitar intro that gives the track its personality. A pair of countrified, lightning-fast guitar solos take the song to another level. Billy Riley (of “Flyin’ Saucers Rock and Roll” fame/infamy) is resented here by “No Name Girl,” a yakety-sax tune that takes some cues from Bo Diddley.

Elvis’ sideman steps out (as The Scotty Moore Trio) with “Have Guitar Will Travel,” a song that isn’t afraid to have an entire verse of bass soloing; gutsy move for the fifties. Though he wouldn’t enjoy major commercial success until the 1970s, Narvel Felts channels equal parts Gene Vincent and Buddy Holly on “Cry, Baby, Cry” (most definitely not the Beatles‘ White Album song).

A few well-known songs do pop up on Raunchy Sugar (Bill Justis‘ “Raunchy” and Elvis’ “Baby Let’s Play House” to name two), but for the most part, the set is given over to lost gems like Don Wade‘s roadhouse blues number “Bust Head Gin.” Sides from Mickey Gilley, Gene Simmons (not the KISS bassist!), Brother Dave Gardner and Bill Black’s Combo hold their own.

Typical of Fantastic Voyage archival releases, Raunchy Sugar presents vintage recordings in surprisingly high fidelity. And the comment I seem to make whenever reviewing product from the label applies just as much this go-round: unless you’re a fanatical aficionado of this sort of music, the vast majority of the cuts on Raunchy Sugar will represent new additions to your collection. As well they should.